SA Artist and Athlete Talks Training, Teamwork and Why You've Just Gotta Do It

When San Antonio's inaugural Rock'n'Roll marathon opened in 2008, artist Kimberly Aubuchon hit the pavement with hundreds of beat seekers, racing past bands at every mile. It was the first half marathon she'd ever run, and after the initial wobbly-kneed shock wore off ("After I crossed that finish line I was like, 'Shit, that was hard. I'm never doing that again,'" she says) she was hooked, and she's been running ever since.

Back then, Aubuchon was working at Artpace while simultaneously running the (now defunct) Unit B Gallery, and had no idea that physical fitness would become any more than a way to lose weight. Seven years later, and Aubuchon is a workout junkie, spreading her passion to her clients as a personal trainer at MBS Fitness and as a certified running coach for the San Antonio Roadrunners.

And she never forgets that fateful Rock'n'Roll marathon, participating in some capacity every year — this year she'll be walking instead of running due to a slow-healing lisfranc sprain that damaged her third metatarsal, but she'll most definitely be rocking nonetheless.

Have you always been a runner?
I stopped running after high school and then I just chased boys and subways for the next few years. I didn't take up physical fitness until I moved back to San Antonio. In October of 2005, I was like "Holy crap I sure have eaten a lot of bean and cheese tacos and drank a lot of margaritas." I had gained a bunch of weight and I decided I needed to go back to the gym.

But I didn't start running initially. It took me about 2 years to get into running after I started going to the gym and lifting weights ... I started making all these bucket list things for myself. I think I had turned 40 at the time and I wanted to make a list of things to do before I turned 50. The [Lone Star] Tower Climb was on it and running a half marathon was on it ... I completed my first half marathon in 2008 at the Rock'n'Roll Marathon San Antonio in 2 hours and 21 minutes. My goal was to finish in less than 5 hours.

What does a typical training program look like for something like the Rock 'n' Roll Marathon? How far ahead are you starting?
The very first training program I did was a 12-week program for beginners. With a beginning program you start at the beginning, running and adding miles as you get stronger. The first weeks are about building your base and then you work on speed and endurance, and then you get your body ready for the taper. You're getting really strong and then you back off for a couple of weeks. Which is really hard once you start doing races. 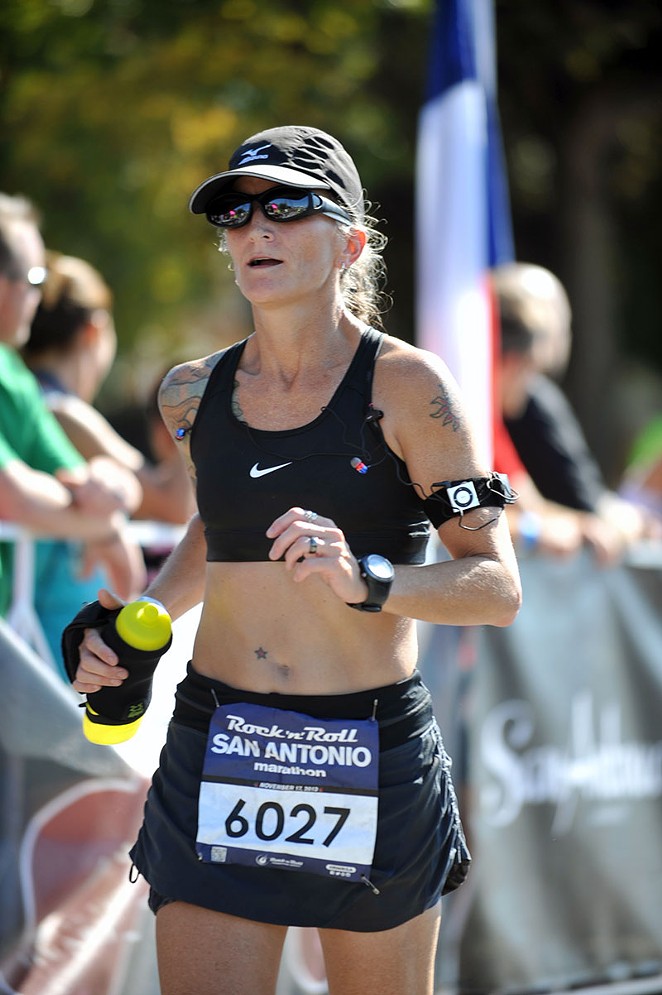 Courtesy
Personal trainer and certified running coach Kimberly Aubuchon had no idea that physical fitness would become any more than a way to lose weight.

After that initial year did you start working with a team?
I never officially trained with a team, but I did make friends ... I became really crazy about running and realized how important it was to me. Sometimes it really stinks being a runner, especially in South Texas because it's so hot. It's hard to find any given 24 hours that is comfortable, even at night. I would get up early and run with my friends

on trails. I would get up at 3 o'clock to meet them at 4:30 to get on the trail by 5 and be done by 8 a.m. ... And doing that, you may feel like a zombie after but everybody else is in the same sweaty clothes that you are and you're all bearing through it together. It's easier in numbers. When you're out there by yourself grilling it there's no support team, there's no "Come on man, just another mile, you can do it."

How'd you make the transition from artist and gallery owner to fitness professional?
As much as I loved my job at Artpace, I worked there for seven years and I started doing the math and I realized that if I kept working at that rate of pay for an additional seven years, I would not be making $40,000 before I was 50 years old.

I was working with at trainer at the time and I was talking to him about it, and he said

"You know you should be a personal trainer." I had to sit down because I loved working out, I loved running, and I thought, "Why didn't I think of this myself?"

What takes more discipline: being an artist or an athlete?
I would say they're both pretty parallel. As an artist, I have to make myself work sometimes and that's really hard for me, because I want to make a good painting, or I want to make a good stuffed animal, but sometimes you just don't feel it. And if you don't feel it you don't want to do it, and that's a lot like running. It's like, I need to run 13 miles today and I don't feel like doing it. But if I don't do it today then that means I'm going to have to do it tomorrow or I won't be prepared for this race. I can't always talk to myself like that about art unless I have a goal, like I'm trying to do work for a show or somebody commissioned me to do something.

What would you tell someone who's considering starting any kind of workout program?
Do it. You gotta do it.

To schedule a workout with Aubuchon, email kimberly[email protected] or visit mbslife.com.