The Musicians of the San Antonio Symphony went on strike last September, saying the board's plan to slash pay and benefits and cut the orchestra's number of players would essentially destroy the organization. 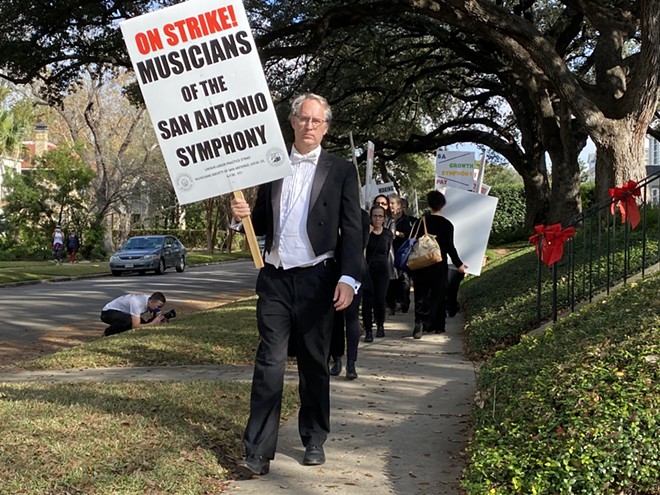 Sanford Nowlin
Musicians from the San Antonio Symphony picket the home of Kathleen Weir Vale, the organization’s chair. They staged the protest in late December.
The Symphony Society of San Antonio has dissolved the 83-year-old orchestra under its guidance and begun bankruptcy proceedings to liquidate its assets.

The nonprofit board made the revelation Thursday night via a statement on its website and in an email blast, saying it can't move forward due to a  nine-month-long strike by its musicians.

The Musicians of the San Antonio Symphony went on strike last September, saying the board's plan to slash pay and benefits and cut the orchestra's number of players would essentially destroy the organization. Last month, the musicians walked away from a federal mediation effort, citing the board's unwillingness to budge.

"The Musicians’ Union has made it clear there is no prospect of the resumption of negotiations, absent the Board agreeing to a budget that is millions of dollars in excess of what the Symphony can afford," the board's statement reads. "The absence of a labor contract has effectively forced the Symphony to shutter its operations."

Union spokeswoman Mary Ellen Goree told Texas Public Radio she was unsurprised by the board's decision to fold the organization.

“I would certainly have preferred it if they had simply dissolved the board and left room for new leadership to come forward," she told TPR, "because there are people in San Antonio who are very much committed to keeping a professional orchestra on stage. The musicians did not have input into this decision, so our perspective was not invited and not welcome.”

In comments to TPR, Goree also said the board violated terms of a 2019 contract that spells out the process under which the orchestra may dissolve. That should have required the vote of the union and the symphony's musicians, Goree told the station, reading from the contract.

Although the board's online statement says the vote to dissolve was unanimous, Goree told the Express-News none of the three musicians on the board were at the meeting to discuss the decision nor did they vote for it.

In comments to TPR, Sebastian Lang-Lessing, the symphony's former music director, blasted the board's move as a scorched-earth solution. The maestro has led a behind-the-scenes effort to convince city and county leaders to help fund the organization and end the labor impasse.

“It's totally in contradiction with the mission of the San Antonio Symphony, and they need to be held accountable for that," said Lang-Lessing, whom the board fired from his position as Music Director Emeritus in April over his decision to conduct concerts by the striking musicians. "By just dissolving now and ... to blame to the musicians is a very arrogant move.”
Stay on top of San Antonio news and views. Sign up for our Weekly Headlines Newsletter.