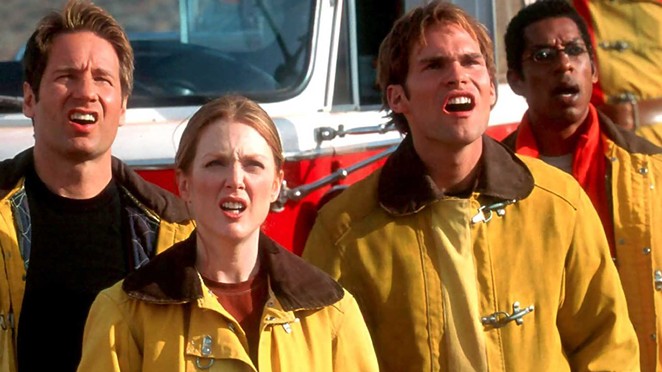 After entering hibernation last year, the boisterous brotherly team Blair and Drew Hicks have caved to the demands of friends and fans in quarantine and found a way to restart their Planet X Cinema film screening series. This time, in a way that can be enjoyed from home.

Unlike the prior format, in which the brothers gave pre-show and post-show chats but stayed shut up during the film proper, their new virtual screenings will feature live commentary, ranging from obscure film facts in "Drew's Hollywood Corner" to MST3K-style witticisms, all delivered in their jocular style.

Unlike Mystery Science Theater 3000, though, the movies are always ones the brothers love and hope audiences will equally enjoy. The pair will mark their return Saturday with an apropos title, given the format update: the 2001 kooky sci-fi comedy Evolution. The Hicks brothers will begin shooting the shit at 7:30 p.m. and the film begins at 8 p.m.

But how do the screenings work?

Viewers can join in on the fun by jumping onto Planet X's trusty Discord server either via Discord's desktop or web apps. To watch the film, pull it up on Netflix or Amazon Prime — but not Hulu, that's a whole other movie, y'all — and pause it at a timestamp provided by the hosts. At the 8 p.m. start time, the bros will count everyone in to begin the film on their devices.

Anyone late to the game won't be left out, though. Blair and Drew plan to periodically drop timestamps into the text chat throughout the film, allowing watchers to join in, or resync if need be.

Audience members can park in the chatrooms and talk amongst themselves, or even eschew the brothers' commentary completely and yak in a free-for-all "Bartertown" voice channel.

Plus, if the commentary gets too much, Discord has a handy mute feature. You can just tune out, enjoy the film and check back in for the post-mortem, if that's your jam.

For now, the brothers haven't announced any more movies, but they plan to host virtual screenings every other Saturday. For updates, keep your peepers on Planet X's Facebook and Instagram pages.

Get our top picks for the best (online!) events in San Antonio every Thursday morning. Sign up for our Events Newsletter.