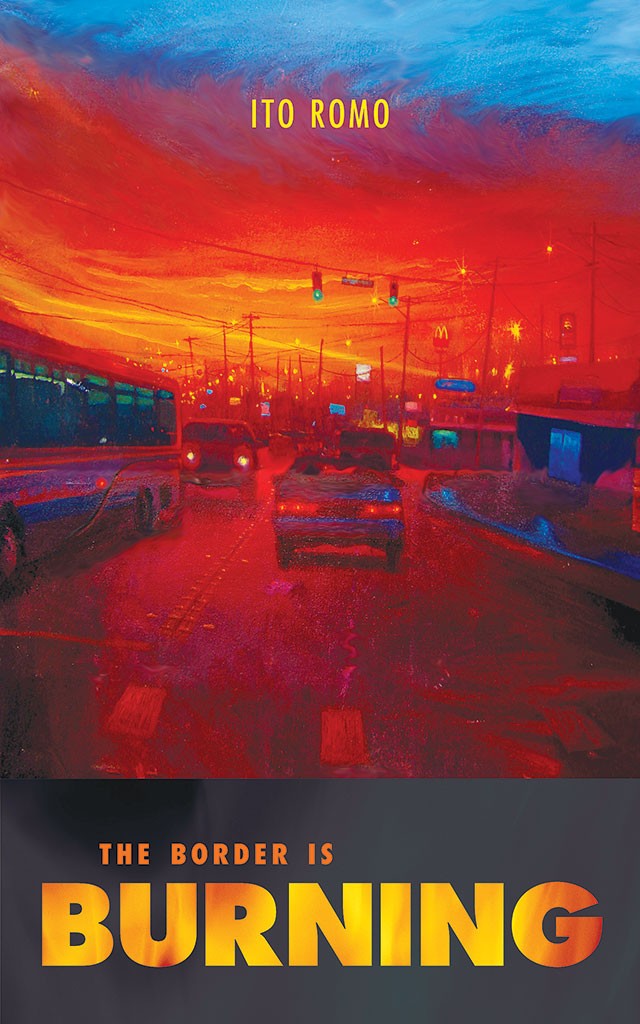 In his first collection, titled The Border is Burning, South Texas author Ito Romo steps far from his magical novel El Puente and gives readers evocative vignettes of characters on the brink of alienation, addiction, desperation and loss. These stories are filled with the gritty, hard-boiled drama that characterizes the literary side of Chicano noir, a genre which has a visual mirror in the work of San Antonio artists such as Adán Hernandez, Alex Rubio and Vincent Valdez. (Little-known fact one: Romo, a professor at St. Mary’s University, is also a visual artist and once had a solo exhibition at Blue Star Contemporary Art Museum curated by Valdez). (Little-known fact two: Valdez created the book jacket’s artwork).

Romo eases readers in with opening story “Baby Money,” a tale of juxtaposition in which a mother, confronted with a sideshow spectacle on the Mexican shores of the Rio Grande after a tumultuous flood, faces her fears while a young boy on the American side does the same. “Chicken Pot Pie” gives unforgiving and ultimately tragic insight into the exaggerated masculinity, or machismo, that runs rampant throughout South Texas. Take, for example, this sentence:­­ “He loved the boys, though, loved them in his own way—macho, hard. They were boys after all, not little sissies.”

The more punishing blows come quick and unadulterated in “Crank,” “Cut Ya” and “The Border is Burning.” These are the barefaced origin stories of South Texas and reminiscent of creation myths such as the Central American Popol Vuh, with yearning women, men and children revealed at their most raw and primitive states. When speaking about the character development in an interview with the Current, Romo said, “I’m writing about the disenfranchised … the people that we have conceptualized into welfare recipients, into the poor, lazy, drug addicts, into all of these concepts that are no longer real anymore. … I hope that people are at least able to think about that underworld that is not a part of ours.”

The overall process to complete The Border is Burning took Romo more than a decade. During that time he won a grant from the Artist Foundation of San Antonio in 2008 to complete the book and saw the story “Crank” published in Akashic Books’ first Lone Star Noir collection. Although The Border is Burning reads quickly, Romo gives readers an earthy, hyperrealistic view of the vast stretch of landscape along Interstate 35: from the arid and dangerous territory near the Rio Grande to the perilous neighborhoods of San Antonio and back. Romo said, “We start on the border and we end on the border.” If you’re looking for a slim but dense read to close out South Texas’ 100-degree summer heat, The Border is Burning is highly recommended.

The Border is Burning

Listen to Romo read "Vacation" below.