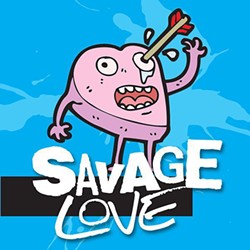 I'm a 26-year-old single bi woman. Sometimes my roommate/best friend and I have drunken threesomes with men. We've had some great one-night stands (less scary with a friend!), but recently we slept with a man I've been (drunkenly) sleeping with over a period of months, my "friend with benefits." I shared my FWB with my roommate because she wanted to have sex, and I shared my roommate with my FWB because he wanted to experience a threesome. I told my roommate afterward that I wouldn't like it if she slept with my FWB on her own, and I told my FWB that we should have discussed having a threesome before it happened. We went out drinking another night, I left early, and they wound up sleeping together. I was upset with my roommate, because she knew how I felt. But I am disgusted and angry with my FWB because he had to "work" to convince my roommate to get her into bed. I have forgiven my roommate—she says she is mad at herself and at him—but it's hard to blame these two friends for hurting me because people make mistakes when they're drunk. Still, this whole ordeal has made me reconsider my friendship with my FWB. He thinks we're just friends, but I have now realized that I have deeper feelings for him. I feel very close to him, and we do a lot of fun things together. I've been pretty open with him about my feelings, but he hasn't shared how he feels. Can I continue being friends with my FWB? Or do I need to break off my friendship with my FWB because I actually want something more with him? What can my FWB do to mend this? What can I do?

Taking your questions one at a time: Can you continue being friends with your FWB? That depends on what your roommate means by "work." If she means your FWB overcame her initial reluctance to fuck him solo with some flirty talk and assurances that you wouldn't mind, then, yeah, you can continue to be friends with your FWB. People have managed to salvage friendships out of relationships that imploded much more spectacularly, BFF. If someone can get past an infidelity or a betrayal or a child conceived with a piece-on-the-side and remain on friendly terms with their cheating, lying, breeding ex, you should be able to work through this. But if what your roommate means by "work" is that your FWB coerced her into having sex, you shouldn't want to salvage a friendship with that rapey POS.

Do you need to break off your friendship with your FWB because you've realized you want something more from him, i.e., a committed relationship? Someone in a FWB arrangement wanting to be more than friends—boyfriend or girlfriend or nonbinaryfriend—is the leading cause of death for FWB arrangements. And while normally the friend who wants to keep things casual is the one who ends the arrangement, BFF, if you want more and you know he can't give it to you, or if you fear you can't trust him around current and future roommates, then feel free to end it. But if you really like him—despite the violation and, emphasizing this again, only if the "work" he did on your roommate wasn't coercive or rapey—then go ahead and ask him to upgrade your FWB arrangement to GF/BF relationship.

What can your FWB do to mend this? He can apologize to you and your roommate and toss his dick around more considerately in the future.

What does it mean when you find a pair of tit clamps in your "vanilla" boyfriend's dresser?

Told Him I'm Not Kinky

Straight man, married for 12 years, love my wife very much. We have a great relationship, and I cannot see myself being with anyone else. A few years ago, she came out to me as bisexual. At the time, it hit me harder than I would have expected. Part of the reason was she explained that she often fantasizes about women when we have sex in order to come. She says she is attracted to me and loves our sex life. We have exhausted the topic of bringing someone else into our relationship and recommitted to monogamy. Is it inevitable that she will cheat to satisfy her curiosity? She says she wouldn't, and I have to trust that, but it is always in the back of my head. What do I do?

I can't promise you that your wife won't ever cheat—not because she's bisexual, JOE, but because she's human. Women who are 100 percent straight cheat on their husbands every day; husbands who are 100 percent straight cheat on their wives every day. And while on the one hand, it's unfortunate your wife told you she sometimes has to think about women to get off during sex with you (not everything has to be shared, people), the fact that she trusted you/burdened you with that information says a lot about your relationship.

So what do you do? Two things: Continue to put your trust in your wife, while at the same time reassuring yourself that your absolute worst-case scenario—your wife sleeps with a woman—will result in the destruction of your marriage only if you define a single infidelity as a relationship-extinction-level event. A pass to fuck a woman at some point in her life may not be something you can let your wife have, JOE, but it may be something you could let yourself forgive.

On the Lovecast: It's the dick show! Listen at savagelovecast.com.