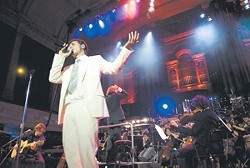 
Before the orchestra begins playing “Feed Us,” Serj Tankian, looking a little like a Satanic televangelist in his tailored white suit, wants to tell you about a very special gal. “She’s over 10,000 years old,” he says of this protective mother figure. “She is dying. Her name is civilization.” That type of well-meaning rock-’n’-roll overstatement is the very quality that made Tankian’s System of a Down such an entertaining (and sometimes enlightening) act, and it’s on full display here with the Auckland Philharmonic Orchestra to impressive effect: Tankian’s one of the only artists categorized in the (absolutely meaningless) nü-metal genre with the outsized testicles and talent level to pull off performing his loud, strange solo debut with symphonic accompaniment.

I think he at least succeeds though I’m not nearly as mesmerized by his current solo work as I was by SOAD’s first three albums. If you’re a fan of none, you should probably skip this one entirely; it’s pretty obviously a fans-only niche item. I’d hoped at first Elect the Dead might convince my wife, a classical-music lover and eternal band nerd, to get down with the Down, and the first piece of John Psathas-arranged orchestration, surprisingly conventional sounding, seemed like it might do the trick. “There’s a wind section!” she actually exclaimed, but Tankian himself was the dealbreaker. “He’s ruining it by singing,” she said disappointedly. Without Tankian’s octave-hopping insanity, it’s true, Elect the Dead would be difficult to differentiate from An Evening With the Auckland Philharmonic Orchestra, but that’s not what the facial-pierced kids (I’m pretty sure I spotted an Iron Maiden T-shirt in the front row) crowded into Auckland Town Hall to see.

“Blue” has Tankian pining “I’m wishing and wishing away at you girl” with enough obsession to transcend what might’ve been a syrupy Bread line. He plays Vaudevillian hoakum off the “Take my hand let’s end it all” desperation of “Baby” for a disturbing dissonance. But the audience energy is only slightly higher than that of a regular symphony with extra devil horns, though Tankian rants “fuck your money” with middle fingers raised. The orchestra, in case you’re curious, takes it all in admirably modern stride. Contrast the first-chair violinist with the prominent flaming cross tattoo with the old man who cringes at every “dick” in the “Penis Dimension” scene from Frank Zappa’s 200 Motels (1971). Elect the Dead’s conductor, Hamish McKeich, even announces the title for “Beethoven’s Cunt.” “I just wanted to hear him say that,” Tankian admits with childish glee. For nonbelievers, that might well be a metaphor for the entire collaboration, but if that’s true, it’s a pretty good joke. Screens Sunday, February 21at the Alamo Drafthouse Westlakes (1255 SW Loop 410, drafthouse.com/westlakes). — Jeremy Martin