In "Star Trek Into Darkness," the second film of the series directed by J.J. Abrams, actor Simon Pegg ("Shaun of the Dead," "Hot Fuzz") reprises his role as Montgomery Scott (AKA Scotty), a Starfleet Officer and the chief engineer on the Starship Enterprise. In this sequel, Capt. Kirk (Chris Pine) leads a man hunt for a former Starfleet commander (Benedict Cumberbatch) who has gone rogue.

Was it always a given you would be returning to play Scotty for a sequel or was there a lot of deal making that had to be done before that happened?

I was excited to do it. We spent the years between the first "Star Trek" and this one just waiting for the call because we had such a great time on the first film. Doing the second one was a no-brainer.

J.J. Abrams, of course, was so instrumental in the success of the first film. Do you think you would’ve reprised your role if he had decided not to direct "Into Darkness"?

The thing is, J.J. was always going to be involved in "Star Trek." Even if he came back as a producer, his stamp would have always been on it with Bad Robot Productions. If the film had nothing to do with Bad Robot and J.J. Abrams, then, yeah, that would have been a concern, but that was never a possibility.

Beam me up, Simon!

How has Scotty changed after the events of the 2009 film?

Well, we worked out that the events of this film take place about six months after the first "Star Trek." Scotty is fairly ensconced in engineering on the Enterprise. He has the job he wanted and is very happy tending the warp core and doing his thing down in engineering. Then the events of "Into Darkness" somewhat upset that.

When a start date for a "Star Trek" sequel is up in the air for so long like this one was, how does it affect you as an actor and planning what projects you work on until a date is set?

You just have to get on with stuff. The organization is good in that they give us advanced warnings so we can keep that time free.  We’d run into trouble otherwise. But they have the option on you as well, so they can basically just pull you out of anything. When you get involved with something like "Star Trek" you agree that when they say go you say OK. But it worked out well for everybody. We were all there front and center on the first day and available for the five months it took to shoot the movie.

Now that we know this new series of "Star Trek" movies isn’t going anywhere for a while, as an actor is it exciting to know that even if everything else goes to shit, you’ll have a "Star Trek" movie to do every few years or so?

I would be very lucky if that was the case. It’s a great film to work on and a great bunch of people to hang out with. I think any actor would be foolish not to see that as a blessing.

I was never a fan of the TV series or the original films, but I really enjoyed what J.J. Abrams did with his version. Was creating a new fan base something that was important to you?

I think what was most important to us was making a good film.  We made a film for film lovers. Whether people enjoyed it in the moment as a single film or joined up with the allegiance of lifetime Star Trek fans out there, the important thing was that the film itself was an effective and enjoyable piece of cinema. We all worked our asses off to make sure that happened. Everyone around J.J. commits themselves 100 percent as J.J. does. He leads by example. All of us just wanted to do our very best for the film.

What was it like having a fellow Englishman, Benedict Cumberbatch, join the cast as the villain?

Well, we had him and Alice Eve, too, who is also British, and Noel Clarke, even though we don’t see him as much. We had our own little British contingent on this movie, which was kind of nice. But we didn’t sit in a corner alone drinking tea and eating cucumber sandwiches. It was a very integrated cast. We all welcomed our new team members with open arms. Everyone settled in really nicely. Even if Benedict was playing the bad guy, he was still accepted into our conversations off set.

What are your thoughts on the film being converted into 3D in post-production? I know as an actor those decisions are out of your control, but in the past, we’ve seen films go through this conversion and not really work.

I wasn’t worried because we didn’t make a 3D film. We made a 2D film. J.J. wanted to shoot anamorphically and you can’t shoot like that with 3D cameras. The compromise J.J. came to with the studio, whose decision it was for the film to be in 3D, was to shoot the film in 2D and then convert it and also push the technology of conversion in doing so. I saw the film in 3D and even though I’m not a huge fan of it as a narrative device because it has no value at all, but it there is definitely value in the sensation you get watching environments like the Klingon high world or deep space or the future. There are environments that are genuinely awe inspiring. It’s another dimension of enjoyment you can participate in if you want. If you don’t, you can watch it in 2D. I strongly recommend watching it in 2D because then you’re solely concentrating on the characters and the story rather than the effects. Although I have to say the effects are very important in a story like this because it is a science fiction story and you are looking at an imagined world. 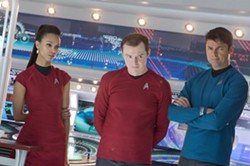 Are you a fan of secrecy behind making blockbusters like "Star Trek?" Studios spend so much time making sure nothing about the film leaks and then release photos and posters and clips little by little. As a fanboy yourself of certain things like "Star Wars," does that drive you crazy or really build up excitement?

I think it’s necessary. Sometimes I think [studios] release too much. I think secrecy is vital because it’s all about protecting the experience of the audience. It’s not just about protecting the film. People can be weak minded and want to know what’s coming, so they need to be protected from themselves. I think you’d want to enjoy any film as it was intended by the writers, with every twist and turn revealed to you as you see it for the first time and not after you see it in some magazine or on some website prior just because those people want to sell advertising. The kind of people that want to spoil the things we do by leaking secrets or revealing plot details are the enemy as far as I’m concerned. I owe those people nothing least of all the truth. I feel very strongly about that.

I can definitely feel that you do. But in this day and age, some asshole is going to see "Star Trek Into Darkness" opening night and after he or she comes out of the theater – or even during the movie itself – is going to jump on Facebook or Twitter and give something away on purpose.

Yeah, unfortunately, there are assholes out there. That’s what we learned from this.

Really? Did anything specifically happen?

Well, I just think people won’t relax and allow it to happen naturally. People are so impatient and have to speculate. In a sense, that even spoils things. Then people are disappointed because they think they know and then they are wrong. It’s intensely childish, really. Just wait until it comes out and then you’ll have all the answers. But some people enjoy that kind of speculation. I guess some people have fun in guessing what’s going to happen. But, ultimately, spoilers are for the weak minded. Spoilers are like a big torch that illuminates the darkness. They’re for people who are too frightened to experience the film and already know what is around the corner. I think if you carry around one of those torches, you’re no friend of mine.

That, unfortunately, doesn’t just happen when people are following movie news. We saw a lot of speculation with the Boston Marathon bombings where networks like CNN basically started reporting rumors as fact during that entire week. I found it insane how much bad information was circulated during that time.

Yeah, I think the dissemination of information is just so intent. Theories can suddenly become fact in a heartbeat. I think that’s the fault of the internet. Anybody can start a website and anyone can appear like they are a printed journalist. People who have no journalistic instinct can pass things as fact. It’s very dangerous when people who don’t have the skill and the sensitivity and the credentials and the integrity of real journalists start spreading rumors around. It’s a very difficult thing to regulate, really. You can’t do anything about it. The best way is to not look at it and to choose your news sources carefully. That’s for both factual news and for entertainment news. If you don’t want to know what’s going to happen in a film, don’t go looking at websites run by nerds.