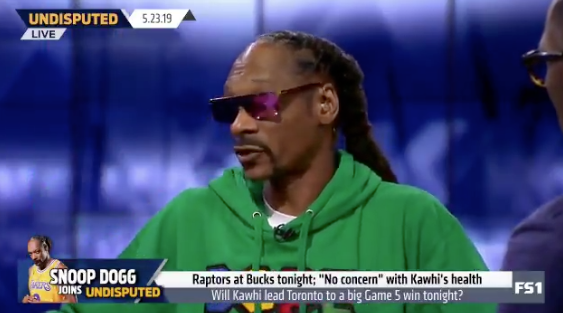 Twitter / undisputed
Just weeks after cancelling an appearance at a local music festival, Snoop Dogg seems to be disappointing San Antonians again by throwing shade at the Spurs.

The rapper and weed enthusiast recently appeared on Fox Sports' Undisputed and talked about Kawhi Leonard. Naturally, the basketball star's 2017-2018 season with the Spurs and his dramatic exit came up.

Snoop said he believed Leonard faced "a lot of disrespect in that locker room." Then, he called out the Spurs franchise.

"That man brought you all a championship. That man locked up LeBron James. He was the shining star," the rapper said. "When he took that injury, he was hearing all kinds of stuff that shouldn't have been said."

I've talked to Kawhi. It was a lot of disrespect in the Spurs' locker room towards him. That man brought them a championship, he locked up LeBron James. Now guess where they are? At home. Guess where he's at? Still playing with less help, just to prove them wrong.

Snoop explained that Leonard was "a baby" then, adding that all the negative locker room feedback was hard to forgive and forget. And he took another shot at the Spurs — one likely to hit fans where it hurts.

"Guess where [the Spurs] are at now? San Antonio, at home," he said. "Guess where he's at? Still playing!"

Not cool, Snoop. Not cool.