There was one omission that might rankle some Alamo City fans. 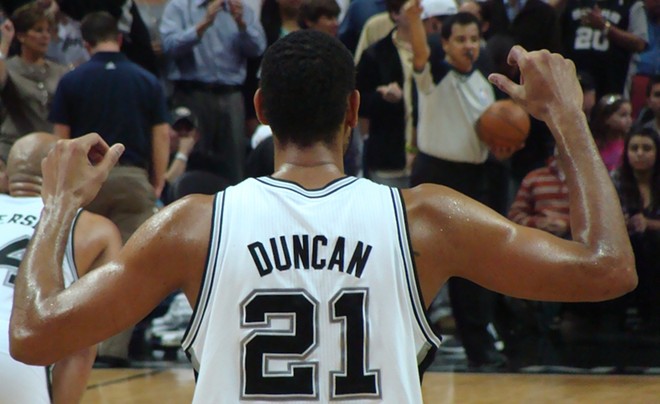 Wikimedia Commons / Zereshk
Tim Duncan takes position during a 2010 game against the Denver Nuggets.
Sports wagering site Betting.com has run numbers that it hopes will end the tireless debate over who belongs on the NBA's greatest of all time — or GOAT — list.

While the obvious contenders took the top spots, a quick scroll down the 20-slot list reveals the name of one of the most famous players ever to wear silver and black: Tim Duncan.

For any Spurs fan, Duncan's name is tied to San Antonio in perpetuity. He spent his entire 19-year NBA career in the Alamo City, bringing home five titles and a recent Hall Of Fame induction. That helps explain why he ended up at No. 11 on Betting.com's list, which was topped by Michael Jordan and followed by LeBron James and Kobe Bryant in the second and third slots.

Since Duncan was the only Spur to make the GOAT list, it begged another question for Spurs fans: who are our top four players of all time? Our Mount Rushmore, if you will? After all, Betting.com noted that the Spurs have "one of the strongest rosters of all the Rushmores."

According to the company's data set, Tony Parker, David Robinson and George Gervin round out the Spurs' top four, which makes complete sense. Parker, Robinson and Gervin have a combined 3,000 (Spurs-specific) games between them, outstripping the rosters of other legendary teams including the Lakers, the Celtics and the Heat.

So, how did Betting.com nail down its list? Glad you asked.

After reviewing more than 10 million social media debates and arguments — specifically on Reddit — which included the words, "NBA," "GOAT" and "Mount Rushmore," the researchers generated a roster of players they believed deserve the status of the NBA's greatest of all time. While there is always room for nuance, remember that the site sifted through the internet's dregs and analyzed what fans had to say, along with the help of a few high-level computer programs.

Then again, we're sure a legion of Spurs fans would have been happy to share the same info with them — and maybe throw in Manu Ginobili for good measure.