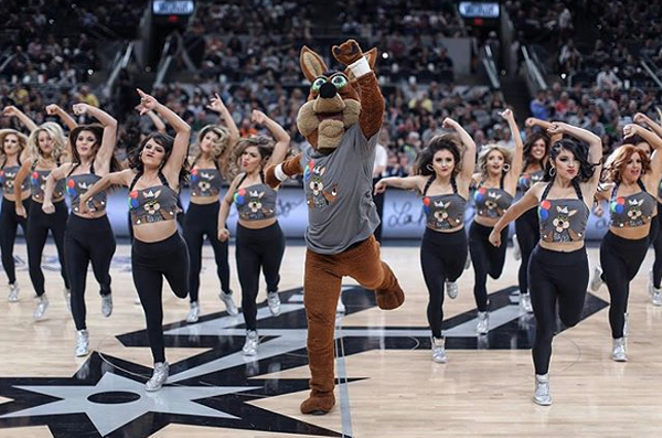 Photo via Instagram, spurscoyote
The Silver Dancers – the Spurs' spirit team – will be no longer.

Instead, the all-female team, which has been around for 26 years, will be replaced with a coed squad. Spurs Sports and Entertainment announced Friday that it will hold tryouts for the inaugural coed "hype team" at the beginning of the 2018-2019 season.


The #Spurs Silver Dancers are no more. I am told the @SilverDancers were told tonight that the program was ending due to lack of fan interest & would be replaced with a larger co-ed team. The news does further explain the press release SS&E sent out today. #GoSpursGo pic.twitter.com/8dNeAwSMBl

The new team has yet to be named, but is looking for those with "family-friendly" skills like tumbling, acrobatics, dance and stunts. Like the Silver Dancers, the team will be part of community events, public appearances and home game performances.

According to ESPN, the change is due to a "lack of fan interest." Fans on social media had other theories.


Lack of fan interest? Wonder where all these followers and YouTube views came from. Not to mention all the $ made for the organization bc of THOUSANDS of kids thru Jr. Silver Dancers Program, prep classes... Hundreds of hours of community service etc... 26 yr legacy, gone. pic.twitter.com/sLkPM7MXYt

My guess is @spurs didn’t want to pay a fair wage or open themselves up to lawsuits like occurring in other pro cities. #NoSpursNo

Open tryouts will be held July 21 and August 5 at the University of the Incarnate Word.