Tears of the Trufflepig Hallucinates a Bizarre Alternate Reality 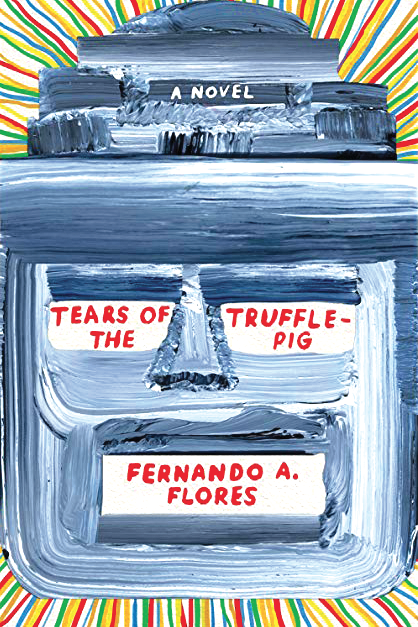 FSG Originals
Texas is fucking weird. Spend enough time here and its surreal peculiarities will work their way inside you like worms partying within a buried skull. Maybe it’s the heat. A Texas sun is not like any other sun. The first week I moved here from Indiana, I took a walk along a farm-to-market road while wearing flip flops. The toe straps snapped on my return trip, forcing me to walk along the concrete on the soles of my bare feet. I don’t know how long I lasted, but I remember waking up some time later in a ditch, covered in sweat and fire ants. The first thing I saw was the sun, looking down like it was taunting me, ridiculing this idiotic human who dared go up against something he did not understand. The thing is, nobody quite understands this land, but many artists have certainly made an attempt. Texas’ underground music scene regularly takes a stab at exploring our state’s many oddities. Murals and graffiti also provide a good sense of our culture.

But nobody understands the fantastical mythology of Texas more than Fernando A. Flores, an Austin bookseller and author who was born in Reynosa, Tamaulipas, Mexico, and raised in South Texas. His debut novel, Tears of the Trufflepig, reads like the insane historical record of an alternate universe only two small steps to the left of ours. Set along the border between Mexico and South Texas, Trufflepig is a mix of Jeff Vandermeer, Roberto Bolaño and David Cronenberg. That is to say, the ideas presented here are full of trippy imagery and terrifying body horror.

Two border walls are already built, and a third one’s under construction as the story opens. It’s a world very much like our own, and also incredibly different.

In Flores’ psychedelic version of reality, the government has legalized narcotics, consequently forcing cartels into trafficking ancient artifacts, shrunken indigenous heads and filtered animals — the latter, of course, meaning cloned creatures brought back from extinction to amuse the rich. Special dinners with expensive invitations spring up at random locations, offering multi-course meals consisting of luxurious foods such as fried dodo birds and Galapagos gumbo. The titular Trufflepig is another one of these animals, although it holds far more weirder purposes than mere consumption. When our protagonist, a grieving widower named Esteban Bellacosa, first stumbles upon this mythological creature at one of these illegal dinners, he’s shocked into silence.

“In the dim lighting it looked like a pig with tiny ears, but it acted very doglike, with its front legs erect. A slurping, salivating tongue hung out of its mouth, which was actually a beak, like a chicken’s or rooster’s. It had the dark green skin of a crocodile, with rivulets shining like a fine pair of boots, and somebody had tied a handkerchief with the border disarmament symbol around its neck.”

By the end of the novel, every reader will want their own Trufflepig — and that’s a guarantee.

In contrast to its science fiction elements, Tears of the Trufflepig also refuses to shy away from reality. After all, this is a novel set on the border. Shit’s inevitably going to get rough. People are granted tax breaks for killing immigrants. Families stake out walls hoping for a chance to shoot a brown person and take a picture posing with their prey. In the year 2019, we don’t need to stretch our imaginations very far for these scenes to seem believable. In interviews, Flores claims to have started the novel back in 2014, long before our current administration, yet it feels like a book that couldn’t have been written any other time than right now.

Tears of the Trufflepig exceeded all expectations in the best of ways, and I cannot wait to follow the rest of Fernando A. Flores’ career. Do not pass on this one.