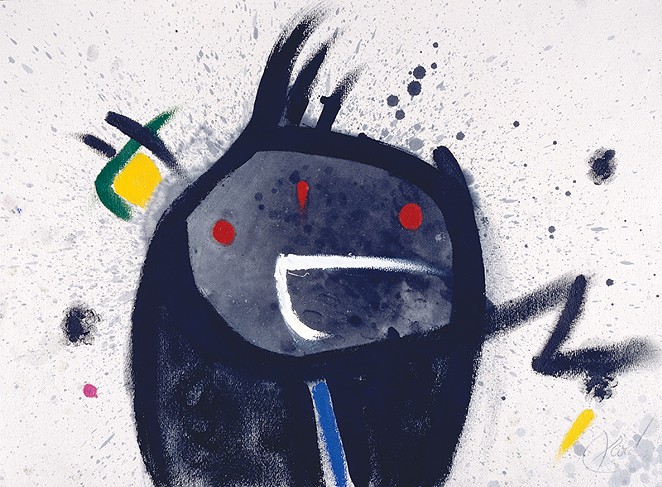 E.T. has found a home at the McNay Art Museum. Originally composed of a squashed straw basket, mechanical parts, a doll's hand and bits of scrap metal, this friendly figure was transformed into solid bronze by the Spanish-Catalan artist Joan Miró (1893-1983) nearly 15 years before Steven Speilberg's movie.

Figure and Bird (1968), which children tend to mistake for E.T. the Extra-Terrestrial, is one of the most enchanting sculptures in "Miró: The Experience of Seeing," on view through January 10. Equally divided between sculpture and painting, this extensive exhibit also features several large-scale, brightly colored canvases created by one of the world's most influential 20th-century artists.

Spain's Museo Nacional Centro de Arte Reina Sofía in Madrid is allowing this work to tour the United States for the first time in this major retrospective, spanning the early 1960s through the end of the artist's life, co-organized by the Seattle Art Museum and making its final stop in San Antonio. Though decidedly old-school — nothing but paintings, drawings and sculpture — this show is modernism at its most fun and exuberant — boldly creative and optimistically focused on the future.

Influenced by surrealists delving into the subconscious through automatic drawing in the 1920s, Miró invented his own, unique visual language drawn from various sources, partly inspired by stains and doodles, and including the art of children, the insane and prehistoric cave paintings. In the 1940s, he began to make sculpture, which reflects the unconventional three-dimensional inventions of his contemporary Pablo Picasso. The McNay's Miró show can be seen as a counterpoint to the "Picasso Sculpture" exhibit on view at New York's Museum of Modern Art through February 7. 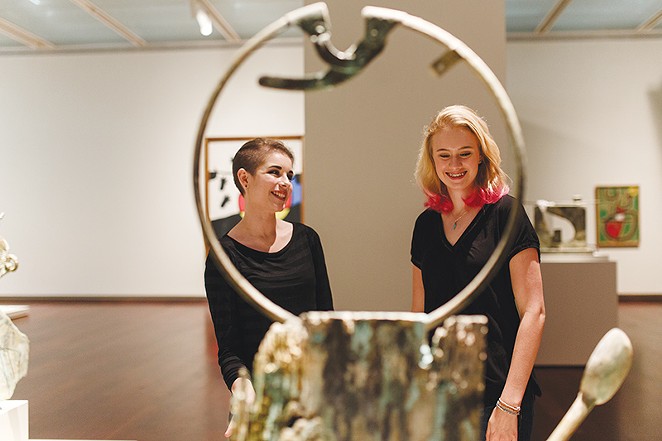 At the McNay, the show opens with a large painting, Woman, Bird and Star (Homage to Picasso), which Miró completed in 1973 to commemorate his fellow Spanish artist's death. Two dangling dark orbs that seem to be eyes look out at the viewer from atop a bulbous figure made of patchwork circles of blue, red, black, green and yellow. The bird perched on the figure's shoulder has a blue crescent moon head. Miró's crisscrossed, asterisk-like star symbolizes creativity and imagination.

While Miró is credited as a major influence on American artists such as Jackson Pollock and Mark Rothko, paving the way for abstract expressionism, his work never became purely abstract despite its highly symbolic character. As Miró said, "For me, a form is never something abstract; it is always ... a man, a bird, or something else." Miró established a universal visual language that can be easily understood by any human being despite cultural, linguistic and geographic differences.

During the last two decades of his life, Miró reflected on his legacy and proceeded to pare down his lines and forms to their purest essence, evoking landscapes, figures and natural forms with only a few lines and patches of primary colors in his paintings. While taking walks during his later years, he collected all sorts of found objects — driftwood, rakes, engine pieces, tin cans — and combined them into three-dimensional assemblages that he turned into bronze using the lost wax casting process.

By the time Miró began experimenting with this body of work, he was already well established as a world-famous celebrity artist. Born in Barcelona in 1893, descended from blacksmiths and cabinetmakers, Miró at first went to business school, but suffered a nervous breakdown in 1912 that led to a career in art. In 1920, he made his first trip to Paris, where he met Picasso and other avant-garde artists, becoming one of the original surrealists in 1924, though eventually he would be rejected by the movement for not adhering to its dogma and instead pursuing an individualistic path of constant innovation.

Retrospectives in New York and Paris in the 1940s solidified his international fame, but the Spanish Civil War and World War II forced him to become an "internal exile," living in seclusion in Spain under the regime of Francisco Franco while concentrating on his work. During this time, he created his most important series, Constellations, introducing celestial symbolism and shifting his focus to the subjects of women, birds and the moon. In 1956, he was finally able to bring all of his work together at Palma de Mallorca in a large studio designed by the Barcelona-born architect Josep Lluís Sert, who succeeded Walter Gropius as dean of Harvard University's Graduate School of Design. Sert also designed the Joan Miró Foundation in Barcelona.

After major exhibits at the Museum of Modern Art in 1959 and the Musée National d'Art Moderne in Paris in 1962, Miró went through a period of introspection and reflection before embarking on the freest and least inhibited work of his career, which makes up the exhibit at the McNay. By excising all the extraneous detail, he finally arrived at a minimalistic style, exemplified by three paintings at the end of the show, such as the two branch-like black lines and three dots of red in The Dance of the Poppies.

But Miró's sculptures show the artist at his most playful and entertaining. A bare footprint outlines a torso. A spoon is a waving hand. A gourd makes a funny hat. A piece of horn tops a Bull's Head. A shovel and a pan serve as faces. He said he made art for people of the future, and "Miró: The Experience of Seeing" proves his work is for the ages.

Miró: The Experience of Seeing

Slideshow: Take a Look at 'Miró: The Experience of Seeing' at the McNay