The Playhouse Serves Up 'Water By The Spoonful' 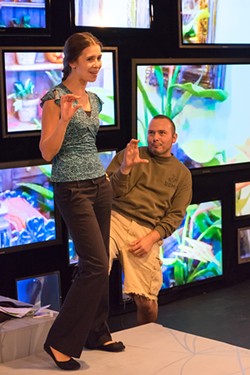 Siggi Ragnar
Dual plots converge in Water by the Spoonful.

For the first half of Water by the Spoonful, which won the 2012 Pulitzer Prize, two separate acts compete within a single one-ring circus. In the first, Elliot Ortiz, a former Marine wounded in body and soul by service in Iraq, and his cousin Yazmin, a newly divorced college teacher, contend with a death in the family. An aspiring actor who sandwiches performing gigs between stints in a Subway shop, Elliot is haunted by his mistreatment of an Iraqi civilian and the fact that his birth mother abandoned him to be raised by her saintly sister.

In the other story line, which alternates and sometimes overlaps with the first, a woman who signs in as Haikumom moderates an internet chat room targeted at crack addicts. Scattered from Philadelphia to San Diego to Japan, they share fierce struggles to overcome dependence. After intermission, the two plots converge, revealing one of the chat room participants to be an Ortiz, a Puerto Rican family based in Philadelphia. Water by the Spoonful is the second installment in Quiara Alegría Hudes' Ortiz trilogy.

Ryan DeRoos' ingenious set allows the two plot lines to share the same space. A bank of video monitors identifies their avatars as druggies log in and say out loud what they are furiously typing. But the monitors also provide images of the Ortiz world that ground conversations between Elliot and Yazmin. Characters from both worlds hunger for human connection. Computer links create the illusion of community, an inadequate substitute for physical presence. For the Ortiz characters, family is a fragile aggregation. "Why is this family plagued?" asks Yasmin as her world disintegrates.

When Yasmin delivers a lecture on John Coltrane's mediation between dissonance and resolution, it is a valuable lesson in both musicology and life. In her agile, passionate portrayal of Yasmin, Julya Jara — who speaks her lines with an appropriate Puerto Rican, not Mexican, lilt — delivers a lesson in how to teach and how to act. Spanning the gamut from chat room tyrant to abject victim of her own flaws, Gypsy A. Pantoja is painful but persuasive.

"Staying clean," warns Haikumom, "is like trying to tap dance on a minefield." So is staging a play this treacherous. Director Jim Mammarella has created an explosive production and it is not by stumbling.

Water By The Spoonful