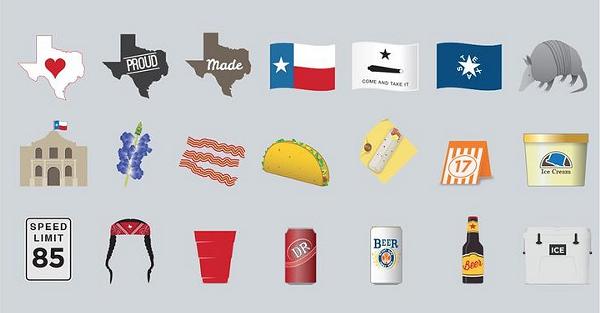 The release marks the arrival of the oft-requested, but heretofore unavailable taco emoji, long considered a glaring omission for its lack of inclusion in the standardized Unicode character set. This year, the Unicode Consortium, the body that decides the standard for computer character encoding, plans to unveil as many as 38 new emoji when Unicode 9.0 is released in mid-2016. But that taco emoji, the one ideogram we desperately need to have meaningful and important text message conversations, still didn't make the cut.

Fortunately, TexMoji has you covered. The taco emoji is one of dozen of Texas-themed ideograms included on a custom keyboard for Apple mobile devices, now available for download for just $1.99.

Also included are representations of what Texans love most, including food, booze, cowboy things and nationalistic state pride. There's a Whataburger table tent, three different burrito characters, a Shiner Beer bottle, a Big Red can, an inner tube with an ice chest, and a Blue Bell half gallon ice cream container, which makes our heart hurt a little bit, given the company's current controversial Listeria contamination. There's also more football helmets than I personally know what to do with, and a Come And Take It flag that will be particularly useful for those late night booty text messages. You can only send the lips, eggplant, water droplet combo so many times before it loses its effectiveness. And that finger goes into the hole combo? What are we? 12?

TexMoji is a great way to show up your Texas pride via text message. But the highly anticipated app, which is currently number three in the top paid apps chart, isn't perfect by any means. For starters, the creators of TextMoji forgot to remember The Alamo. An emoji for the Shrine of Texas Liberty was included in promotional images for the app last month, but the San Antonio icon is not included in the app's initial release.

There's also the problem with the fact that TexMoji isn't truly a custom iPhone keyboard. The standard Unicode emoji keyboard allows users to type images the same way one would type out letters. On TextMoji's custom keyboard, users are required to copy and then paste the picture characters directly into the text field. So while we didn't know we needed that Jarritos bottle emoji in our lives, the extra step it takes to illustrate our text messages can be tedious. Another drawback is the keyboard uselessness on social media, meaning that taco emoji can't be used for your Facebook status updates.  That's likely because none of the Texas emoji are part of the Unicode Standard, meaning the app developers had to make do. So while we finally have that taco emoji we so desperately needed, we're still going to have to push for one that's Unicode Consortium-approved. Then all will be right in the world.