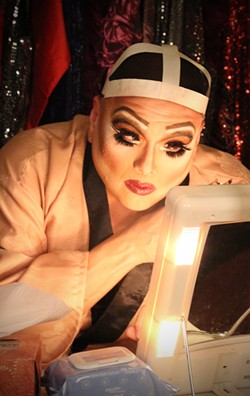 A descendant of the old carpas of San Antonio, Greg Hinojosa's grandparents and great-grandparents traveled the country as trapeze artists, contortionists and clowns, doing whatever they could to convince audiences to come see their show. So, suffice it to say, for Hinojosa, theater isn't just his job — it's his birth rite.

Today, Hinojosa sits at the helm of the Woodlawn Theatre. In his four-year tenure as artistic director, the theater's diverse seasons have included a range of high-quality shows from family-friendly musicals (Mary Poppins opens June 26) to the now-famous annual production of Rocky Horror that stars contestants from RuPaul's Drag Race. It's an impressive balancing act that Hinojosa credits to a supportive board and an accepting audience that always shivers in anticipation.

What made you decide to put Drag Race contestants in Rocky Horror?

Face it, it's a cult classic, people are going to see it no matter what, and you can do it traditionally, or you can choose to be a little bit more creative ... Someone suggested bringing in one of the contestants with RuPaul's Drag Race down and I thought, "now, that's not a bad idea."

Do you find it frustrating as an artistic director that we don't see plays that reflect the voices of the LGBT community?

I don't know if I would say it's frustrating, it's certainly challenging. One of the reasons why I wanted to do La Cage Aux Folles on the main stage, was that I wanted the story to have a broad audience ... because it shows a nontraditional family that's really rooted in good morals and love thrust into a society that is very judgmental towards them. I think a lot of that has to do with fear. What we don't understand, we fear. And until we're able to break through that fear we're never going to be able to coexist with one another.

Can we expect any non-traditional stylistic twists on Mary Poppins?

Everybody knows the movie. Everybody knows the song. When you see the Wizard of Oz onstage, you expect to see and hear Judy Garland sing "Somewhere Over the Rainbow" and if you don't give the audience as close to that as possible, they're not with you ... So with Mary Poppins I have to give the audience a little bit of what they expect and a little bit of the unexpected — which is what makes it exciting to work on.