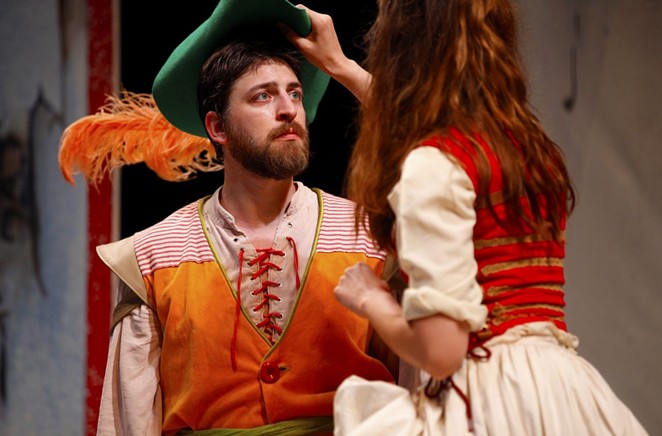 Courtesy of Arkansas Shakespeare Theatre
Thu 11/16 - Sat 11/18
Shakespeare on the River: The Taming of the Shrew
The Magik Theatre presents a celebration of Shakespeare with a performance of The Taming of the Shrew, believed to have been written around 1590. The production marks Arkansas Shakespeare Theatre’s second visit to San Antonio, the previous being at last year’s Shakespeare in the Park. The play, which is performed as part of a prank on a drunk, surrounds male competition for a bride and the manipulation of Katharina, an assertive and quick-witted daughter of a lord in Padua, Italy. Because her younger sister, Bianca, isn’t allowed to marry until Katharina has found a husband, Bianca’s suitors try to find a man for Katharina. Enter Petruchio. Once wed, he tricks and breaks down Katharina in various ways with the goal of eventually “taming” her to be the proper submissive wife (you know, the “desirable” kind). Meanwhile, the competition over Bianca gets tangled, adding nicely to the display of archaic gender politics. Free, 7:30pm Thu-Sat, La Villita, Arneson River Theatre, 418 Villita St., (210) 227-2751, magiktheatre.org. — Kelsey Valadez