Their separate appearances mere days from each other have raised eyebrows in San Antonio. 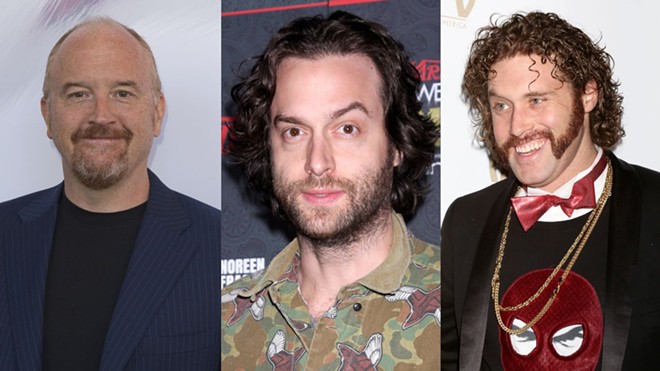 Shutterstock / Lev Radin, Kathy Hutchins
All three artists have been touring since live comedy resumed following the initial phase of the COVID-19 pandemic.

Three big-name comedians coming to San Antonio over the next few weeks have one thing in common: they've all faced high-profile allegations of sexual misconduct.

On Friday, Jan. 20, T.J. Miller kicks off five-show run at Laugh Out Loud Comedy Club. Then on Sunday, Jan. 23, Louis C.K. will perform a sold-out show at the Majestic Theatre. Less than two weeks later, on Thursday, Feb. 3, Chris D'Elia also will appear at the Majestic.

All three have been touring since live comedy resumed following the initial phase of the COVID-19 pandemic. However, their separate appearances mere days from each other has raised eyebrows in San Antonio.

The run of shows comes more than five years after the #MeToo movement brought on a reckoning with sexism and sexual misconduct in American society, promising to upend the entertainment industry.

While some powerful men such as former movie producer Harvey Weinstein did face serious repercussions, some observers worry that the outcry has yielded a backlash against women coming forward. Jessie André, a professor of social work at San Antonio's Our Lady of the Lake University, said that the upcoming appearances by C.K., D'Elia, and Miller reflect "what we value as a society."

"Some of these [sexual abuse] survivors have been met with support, still most experience backlash, disbelief and shame," André said via email. "This 'backlash,' I would argue ... is society reverting to its oppressive nature."

The Majestic Theatre didn't respond to the Current's request to discuss its booking of C.K. and D'Elia. Laugh Out Loud declined comment via email.

To André's point, the careers of some men implicated in the #MeToo groundswell have rebounded over recent years. That's particularly true of C.K., who won acclaim from his own industry last year when he picked up the Grammy for Best Comedy Album.

The award represented a remarkable turnaround given that C.K. issued a public apology after five women accused him of sexual misconduct in a 2017 New York Times article. Both Netflix and FX Networks cut ties with the comedian in the wake of the scandal, and a movie project he was working on evaporated.

In 2020, several women accused D'Elia of contacting them online when they were underage and soliciting naked photographs from them. What's more, he was hit with public accusations he'd exposed himself to Megan Drust and other women. He subsequently said he'd sought therapy to deal with the matter but claimed his interactions were "legal and consensual." Even so, he was dropped from projects including a part in Zack Snyder's zombie action film Army of the Dead.

Meanwhile, Miller faced a 2017 accusation that he'd sexually assaulted a woman in college — a claim he's denied. In the years since, he's been hit with accusations of harassment from a costar on the HBO series Silicon Valley, from which he was dropped, and he also made headlines for falsely accusing a fellow Amtrak passenger of carrying a bomb and getting into a physical altercation with an Uber driver.

The comics' ability to book shows suggests some audience members are willing to give them another chance. However, not everyone working in comedy is happy to see men with abuse allegations touring again.

"I don't think that those guys should be allowed to come back," Amy Schumer said in a Hollywood Reporter profile last year.

The accusations against the three men coming to San Antonio also raise questions about whether comedy remains especially toxic.

Jay Whitecotton, a Texas standup who started his career in San Antonio, doesn't think so. He argues that politics also is rife with accusations of sexual misconduct.

"This isn't just happening in entertainment, a place that breeds it," he said. "Look who you're voting for."

Broadly, Whitecotton suggested that boycotting entertainers for their bad behavior is misplaced when people could be focusing on whether to buy products from corporations that have acted to subvert democracy or destroy the planet.

But OLLU's André said the question is less about showing financial support than it is sending a signal to those dealing with the aftermath of sexual harassment or assault.

"The decision to publicly support individuals who have a history of sexual misconduct or assaults is not nearly as impactful as the message that it sends to our friends, family members, loved ones who are survivors that have not shared their stories yet," she said. "Can they trust you with their story? Can they be mentally and emotionally safe with you?"

Whatever ethical decisions we make about our own entertainment dollars, Whitecotton said C.K., Miller and D'Elia are touring again because someone is willing to pay to see them.

"The people they're entertaining, they dictate it," Whitecotton said. "The market dictates it, unfortunately."