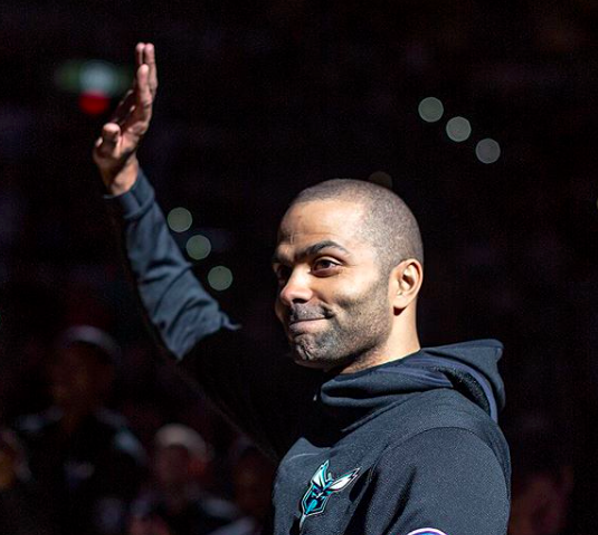 San Antonio’s all-time leader in assists was all smiles as he made the rounds before tipoff, sharing an extended greeting with his longtime backup Patty Mills at midcourt. After a tribute video highlighting his four championships with the Spurs, Parker flashed a familiar grin as he was welcomed with chants of “Tony, Tony.”

Earlier in the day, Parker anticipated a nostalgic homecoming, reflecting at shootaround on his 17 seasons with the Spurs.

“Time goes really fast,” Parker said. “We just had great years. Changing teams, you appreciate even more what we had here in San Antonio. It was very special with Timmy and Manu and Coach Pop and all the great teammates that I played with over the years. All the stuff we were able to accomplish here, it was amazing.”

Once the ball was in the air, Hornets point guard Kemba Walker took over, scoring 13 points in the first quarter against a sluggish San Antonio squad. Walker finished the night with 33 points to lead all scorers in a game the Spurs seldom led. When Parker scored his first points in the third quarter, the home crowd cheered.

For a brief stretch in the fourth quarter, glimpses of a familiar quicksilver Parker shone through as he attacked the rim for 6 more points. With victory in hand, Parker checked in once more for a curtain call, soaking in the appreciation from those left in the crowd to close out an important win for his new team.

“It’s just a different challenge,” Parker said. “That’s what I was looking for. We’re just trying to fight with a young team. We’ve got a lot of young guys in this team. They try to find their way in this league. As a veteran, I try to help them as much as I can.”

Parker returns to San Antonio on March 28 for Manu Ginobili’s jersey retirement ceremony, where he plans to “start the party.” For Spurs faithful, it will likely be a rare opportunity to catch San Antonio’s iconic Big Three in the same building. Parker is already anticipating his remarks.

“Ten days, two weeks before, I’m going to start writing, because obviously Manu is very special,” said Parker. “It’s going to be a special day. So I want to make sure that I’m ready for it, and make sure I don’t disappoint him. It’s a very important day.”