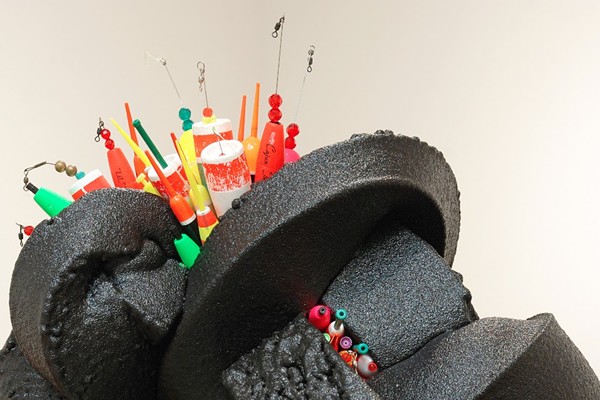 Buster Graybill, “Recreational Modernism”
An assistant professor at UTSA, Buster Graybill employs sculpture, installation, video and photography as “an all-terrain vehicle to traverse the rural landscape and reconnect with often-overlooked places.” Putting a conceptual spin on classic American pastimes like fishing and camping, Graybill’s previous projects encompass sculptural installations bursting with tangled inner tubes and a super-sized bronze catfish perched atop a replica of a high-voltage box. But it was the 2010 exhibition he created for Artpace’s International Artist-in-Residence program that brought Graybill to the attention of many San Antonio art fans. Named after a large, tusked hybrid of a domestic pig and a Russian boar, his “Tush Hog” took shape in an installation of sculptural hog feeders Graybill crafted in diamond-plate metal, filled with corn, released on a ranch and monitored as they were discovered by an array of wildlife. In addition to the “corn-dispensing artworks,” the finished project included photographs and video captured with infrared cameras. Aiming to challenge “perceived notions of value and hierarchies imposed on objects of ‘high’ and ‘low’ culture,” the outdoorsman and contemporary artist’s new Sala Diaz solo show “Recreational Modernism” celebrates “the conceptual potential of objects and materials often tucked away in garages, found on the shelves of sporting goods stores or loaded on the bed of a truck for a weekend vacation.” Free, 6-10pm Fri, Sept. 9, Sala Diaz, 517 Stieren St., (972) 900-0047, saladiazart.org. On view through October 15.