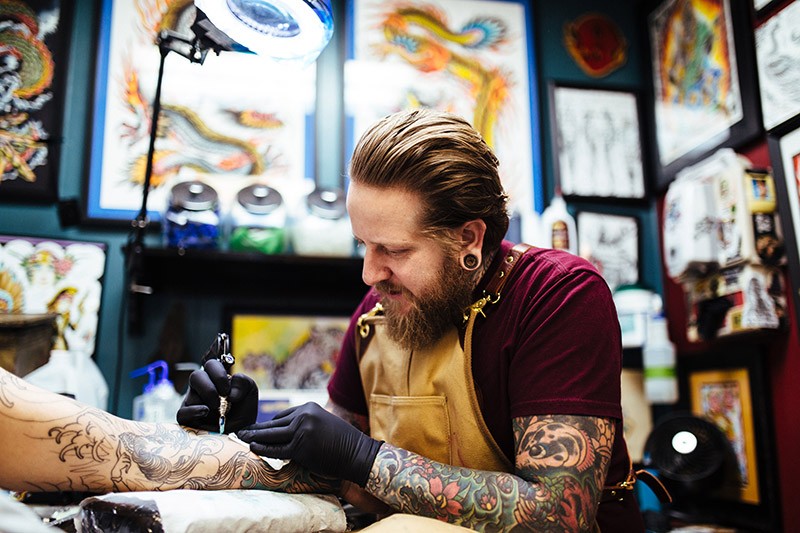 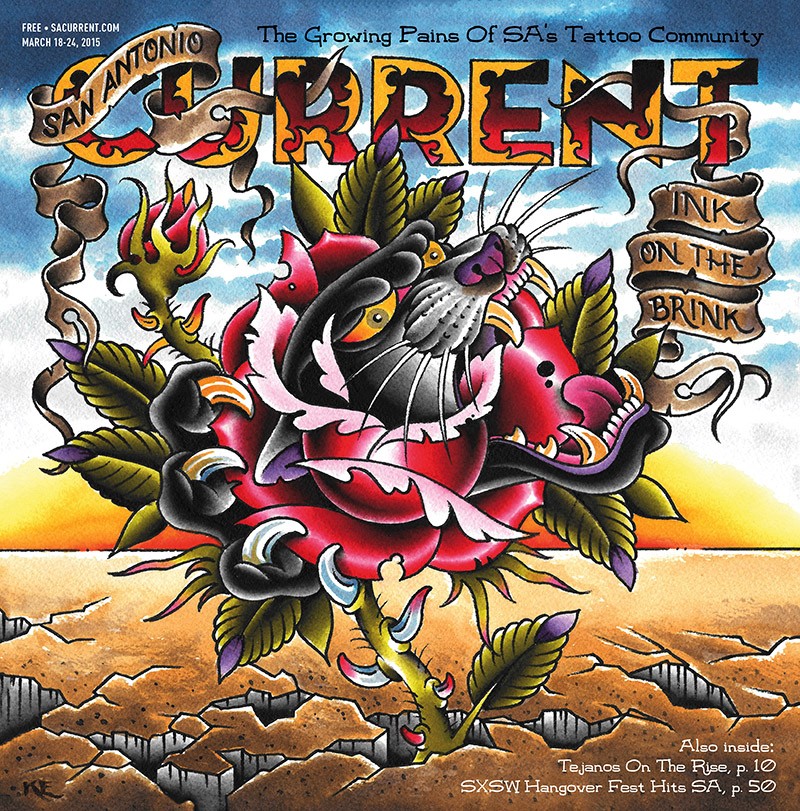 James "Snapper" Snap carefully sketches an outline on the calf of a young woman getting ready for her latest tattoo, an elegant arrangement of lilies and stars.

In business since 1971, the self-described elder statesman of the San Antonio tattoo community might sound like a curmudgeon amid a new generation of artists. But Snap is sincere and straightforward when he speaks about the plethora of changes he has witnessed during his long tenure in the industry, which includes 20 years as the owner of Phantasy Tattoos on the city's northeast side.

"A lot of these young people who are in this business today, the first thing that comes out of their mouth is, 'I'm just in it for the art,'" Snap, 68, told the San Antonio Current at his shop this month. "Well, if you're just in it for the art, then you're fucked up because tattooing isn't an art, it's a craft."

The "art versus craft" debate may seem irrelevant to someone just looking to get marked up, but it's actually much more than skin deep for industry insiders. It's a distinct difference in philosophy that's quite noticeable for those who have seen San Antonio tattoo culture evolve.

Snap's "craftsman first, artist second" mentality stems from the way he was taught during his time as an apprentice. Back then, it was mandatory to know how to build tattoo machines and needles and etch out stencils. Apprentices had to pay their dues learning under a master tattooist for a few years before breaking out on their own. Nowadays, Snap lamented, people call themselves tattooists just by getting online and buying a cheap tattoo starter kit – likely made in China – and then learning the hard way that it's actually not that easy.

"When I entered the tattoo business, it was a closed society," Snap said. "Today, everybody thinks they're a tattooer. They're like, 'Come over to my house and I'll show you how good I am.' Then, after getting their tattoo, they end up coming over here and paying me a whole lot of money to fix that shit."

When he opened in 1995, Snap said there were less than 10 local shops in San Antonio. Now, according to the Texas Department of State Health Services, there are currently 104 registered in Bexar County.

"There are some really good tattooers here in town, but there are also some really bad tattooers," Snap said. "Because of that, the quality across the board is not what it used to be."

A local tattoo shop whose quality is usually unquestioned is Element Tattoo Studio in northwest San Antonio. Owner Jedidia Reid, 36, seems to strike a balance between old and new school mind-sets. He said he came into the business about 15 years ago, when premade ink and needles weren't readily available. He understands veterans' frustration with new artists coming in like they know everything, yet they're mostly clueless about what it all entails.

Josh Huskin
One of Reid's works in progress.
[Slideshow: A Photo Tour Of Element Tattoo Studio]

"After the internet became prominent, all those trade secrets like building machines and needles were kind of lost," Reid told the San Antonio Current. "There's less of that complete creative process now. There's integrity and power in knowing a design is hand drawn and the needle and ink is handmade. To know that some of these kids will never be able to do that is kind of a shame."

Reid also feels there is not as much mutual respect among shop owners as there was when he first got started. One unwritten rule no longer observed: owners not opening up next to one another.

"Rule of thumb was that there should be at least a 25-mile radius between shops," Reid said. "That was your zone. But that doesn't exist anymore. There are three shops within throwing distance from this one."

But that's where he reconciles remembering the good ol' times with today's reality.

"You know, this is a business," he said. "People want to make money, so sometimes their selfishness will overpower their moral compass. You see that in every industry."