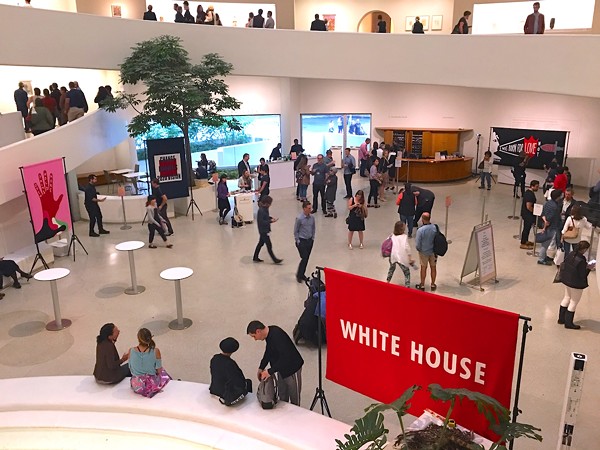 House of Trees Collective
As New York magazine reminded readers in an article last year (“Trump Has Turned Millions of Americans into Activists,” April 6, 2018), “The day after Trump’s election, outraged women (and their male allies) descended on D.C. to express their contempt for the pussy-grabber-in-chief, in the largest protest since the Vietnam era.”

Amid the massive crowd of 500,000-plus were conceptual, defiant and poetic protest banners created by female artists and writers associated with the creative endeavor “Word on the Street.” In tandem with the mobilization of the masses, this ongoing project has gathered steam via New York exhibitions and programs in Times Square and the Watermill Center. Combining the talents of internationally recognized artists (including musical mad scientist/performance artist Laurie Anderson, text-centric provocateur Jenny Holzer and mixed-media master Wangechi Mutu), local poet/author/educator Naomi Shihab Nye and sister-powered organizing entity House of Trees (aka HOT, launched by San Antonio’s own Jennifer Khoshbin and Brooklyn-based Amy Khoshbin), “Word on the Street” broadcasts messages both simple and sublime while referencing and questioning everything from the White House (Holzer) to Sophocles’ Greek tragedy Antigone (author Anne Carson’s declaration “I Was Born for Love Not Hatred”).

Opening a window into its politically charged past, present and future, “Word on the Street” arrives in the Alamo City courtesy of Artpace via a group exhibition on view in the Hudson Showroom through April 28.