Walking the Footprint: A Preview of Selected Artists/Performers by Area 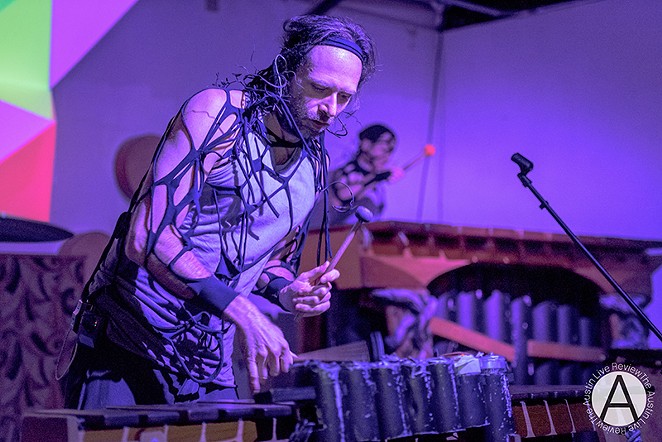 Due to expected severe weather, Luminaria has cancelled and/or postponed a number of outdoor events and exhibitions. Indoor Luminaria events will go on as planned. For a list of Luminaria cancellations, click here.

This nomadic Belgian-American street artist and filmmaker, who creates striking works that surrealistically plumb the shadows of our deepest unrest, will produce an onsite mural entitled I Am No One. We don't know what this piece will look like yet, but his past work and that haunting title seem to suggest a dark piece that examines the loss of identity and/or the struggle to maintain it.

Denver-based artist, musician and filmmaker Ronnie Cramer is an all-arts lifer. Active for 30-plus years in various mediums, he has been especially lauded for his experimental, independent film work. For Luminaria 2015, Cramer will unveil an animated video composition entitled simply SA, which is comprised of more than 4,000 individual watercolor paintings and acts as a virtual tour of the city.

East of the River

Homegrown Tejana art/activist collective Más Rudas will present Walking Altars as their roving performance project for Luminaria this year. The collective, comprised of Kristin Gamez, Sarah Castillo, Mari Hernandez and Ruth Buentello, told the Current that it thrives on creating "fully-collaborative, multi-media installations that promote dialogue about our personal and social identities as Chicana/Tejana women from San Antonio." The altars, a concept deeply rooted in Mexican-American culture, will be "worn" by the four members of the collective and will each tackle a different social issue.

Formed at the University of the Incarnate Word, Convergent Media Collective — which is debuting two projects at Luminaria this year — is an arts, technology and community-building coalition. Representing the collective at Luminaria this year, artist Andrew Valdez will present Tortillas & Technology, an interactive station where various images will be printed onto tortillas. Folks are encouraged to bring images to upload and then watch as they are printed onto those popular and pillowy agents of yum. This shrewd and deceptively-superficial conceptual project looks, albeit rather flippantly, at religious and superstitious experience, literalizing the way people thrust their own beliefs and egos onto the world around them.

SA-born Brooklynite, playwright and performer Virginia Grise will present, along with her collaborator artist Rafa Esparza (hailing from LA), a performance ritual based on work by local poet Joe Jiménez. Grise, who has exhibited at Luminaria before, told the Current that she wanted to explore "intimacy and public ritual in a performance event." Working with Esparza, and in consort with Jiménez, Grise has prepared "an immersive, sensory experience" based on Jiménez's prose-poem "The Presence and Absence of Kites." Grise said that the entire performance with be built around the ritual of making barbacoa. So bring your Big Red and get set to enjoy the tender meat of gorgeous Chicano poetry like never before.

When you hear San Antonio band The Bolos play, two things are immediately evident. First of all, this Saytown foursome is as fearsome as they come, wrangling wildly electric garage-rock bombast into even the most basic blues-infused tunes. Secondly, they write incredible songs that will leave you with the simultaneous impressions of having heard something wholly new and eerily familiar. Suffice it to say, the canvas that these boys paint upon, in black and blue and bulging convulsions, is the one within each listener.

The Aesthetic of Waste

Representing The Aesthetic of Waste collective, which was formed at Trinity University in 2012, Seth Larson, Abigail Entsminger and Noah Voelker will present the interactive performance/installation FaceLookLive for the first time in the U.S. Larson told the Current that "FaceLookLive is a startup analog social-media network created specifically for the festival environment, helping people connect efficiently and with guaranteed success." Using algorithms similar to those used by social-media networks, FaceLookLive is, at least in part, "meant to demonstrate to users of social media the ways in which the information they publish on particular websites can be repurposed."

Korean artist Woonhak Chung is bent on heightening spiritual and everyday experience through playful and, quite literally, illuminating works of art. Often employing the figure of The Buddha, Chung begins from a meditative place and lunges forth, radiating joy and immersive color in his enrapturing public art pieces. Ruminative and silly in equal measure, Chung's past work hints at a Luminaria debut that exemplifies the admirable Buddhist predilection to laugh at oneself, even while seeking spiritual nourishment.