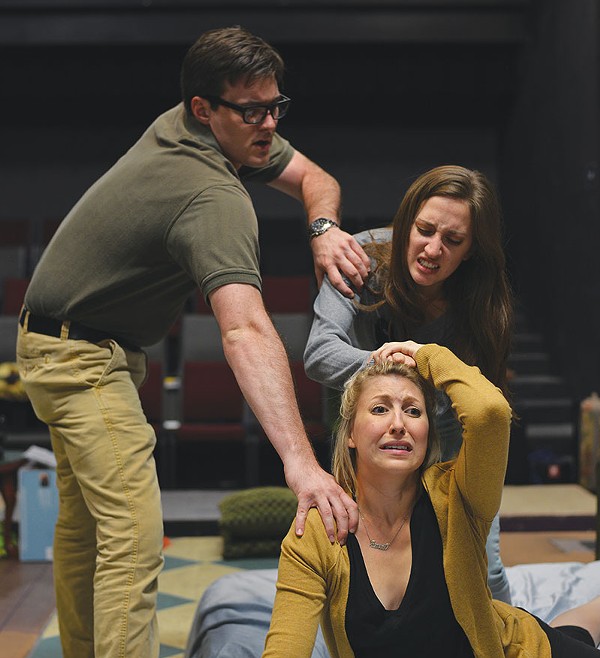 Courtesy
Family heirlooms can bring out the worst in people.

After the funeral of a Holocaust survivor, his grandchildren – Daphna Feygenbaum and Jonah and Liam Haber — spend a bellicose night together in an Upper West Side studio apartment. A garrulous, opinionated yenta who is soon to graduate from Vassar, Daphna proclaims her intention to pursue rabbinical studies in Israel. She excoriates Cousin Liam for skiing in Aspen while Poppy was dying and castigates him for being a self-hating Jew who, a graduate student in Japanese culture, is respectful of every tradition but his own. He is, she insists, "a bad Jew." Liam even has the chutzpah to bring along a shiksa, a blonde, bland squeeze named Melody.

Much of Bad Jews, Joshua Harmon's raucous, wrenching, and riveting comedy, consists of ferocious rants that Daphna and Liam each deliver against the other. Liam accuses Daphna, whose real name is Diana, of fraud, of flaunting her Jewishness to disguise insecurities. Daphna warns that Liam's assimilationism is a rejection of family bonds and a fatal blow to a rich and ancient heritage. She also envies Liam's parents' wealth: "Compared to your family, we're the Joads."

Fierce conflict between Daphna and Liam comes to a head over an heirloom, a gold amulet in the shape of "Chai," a Hebrew word meaning alive (Daphna gives chai the authentic guttural pronunciation, whereas Liam Anglicizes it as hai). Poppy held on to it through two years in the Nazi camps, and Daphna now covets it. But, as the oldest grandchild, Liam warns: "You would have to kill me before I would let you have Poppy's Chai." Refusing to be drawn in, Liam's younger brother Jonah insists: "I really don't want to be involved in this." Jonah is the most taciturn of the characters on stage, but his actions speak louder than words at the play's startling conclusion.

Ava L'Amoreaux brings energy and subtlety to the exhausting role of Daphna, an obnoxious, manipulative, pious and pathetic creature. Chris Rothbauer crafts Liam as an explosive case study in the failure of anger management. Brandi Hollsten's Melody is a vapid goy who nevertheless commands one of the play's best moments — a brilliantly awful rendition of the song "Summertime." Though the cat got his tongue, Nicholas Bright's Jonah swallows the whale.

Director Mark McCarver sets his production of Bad Jews in the round, situating the audience as onlookers at a vicious family squabble that we are helpless to mediate or ignore. "What is a good Jew?" is the puzzling question implicit in this play. Bad Jews answers with a nasty, hilarious barrage that resolves nothing but demonstrates how desperate human beings make their separate offerings l'chaim, to life.