What Not to Miss at This Year's Fashion Week San Antonio 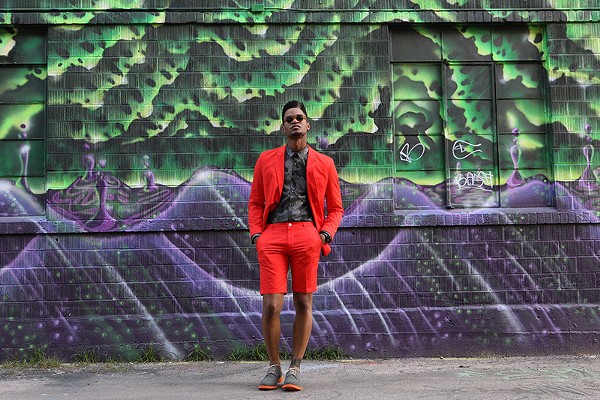 Since 2012, Tony Harris has been the local face of Fashion Week, taking the reigns as producer of the annual weeklong event after Fashion Group International disbanded; it's easy to wonder whether he's grown weary of the gig.

Harris, however, swears his excitement hasn't waned. "I tell people all of the time, it's really a brand new experience for me every single year because our programming gets bigger, the participants and sponsors and support that we have get so much bigger," he explains.

Acting as the sole curator of the young festival ("It's very important for me to streamline a process that gives focus to what fashion is really about"), Harris prides himself on his balance of both local and outside designers that capture the unique spirit of San Antonio; but, of course there is bound to be a certain degree of personal subjectivity to his process.

Following a social media outcry over his omission of local designer Leighton W. Couture, Harris stood by his program. He emphasizes, "When we developed Fashion Week San Antonio, it was all about recognizing the local talent and the local industry as a whole. The strategy first and foremost is to really recognize talent locally that is worthy of recognition."

The following are a few hometown highlights, many of which can be found inside Texas A&M–San Antonio's Centro de Artes, known during FWSA as Showspace.

Pull the sugar skulls out of your closet and kick off FWSA in high fashion. "Last year we were very impressed with how many people just got it beyond right with how far they went out for these garments, and I'm excited to see what they're going to come up with this year," says Harris. And as always, these threads count, with prizes awarded to the top three best-dressed attendees. The night includes the reading of the FWSA's official proclamation by Mayor Ivy Taylor, complimentary cocktails courtesy of El Jimador Tequila, and nonstop sounds by DJ Jarvis. $30-$40, 8pm Sun, Nov.1, Tobin Center for the Performing Arts, 100 Auditorium Circle, fashionsa.org.

Now in its second year, the Arte of Fashion Gallery gives artists the chance to develop visual art with a sartorial flair. The exhibit marks the beginning of what Harris hopes will be a long, exciting artistic partnership with contemporary artist Cruz Ortiz. Also featuring Estela Aguirre from Mexico, the gallery celebrates the intersection of fashion and art for a good cause. Thirty percent of the proceeds from each sale will benefit Girls Inc., the official charity of FWSA 2015. Free, 10am-4pm Tue, Nov.3-Sun, Nov. 8, Showspace, 101 S. Santa Rosa St., fashionsa.org.

Tony Harris created the Moda Next showcase back in 2012 as an emerging designer competition. Today, with support from the City of San Antonio and the Department for Culture & Creative Development, the program exists as an incubator for local talent, providing not only a platform during FWSA, but also mentoring and business support throughout the year.

Harris promises this will be the best Moda Next yet, with returning designers Joey Ramirez, Valerie Perez, Christian Alonzo, Blanquita Sullivan and Bruno Horwath tearing up the runway with a "more secure and confident" aesthetic. Tessa Guerra, owner of the Pearl's Roo & Me, also joins the lineup with her line of children's clothes.

"It's always about showing what's next, showing what's cutting-edge, showing what's fashion-forward. These emerging designers are exactly what that is. Fashion Week is really centered around the young talent and what they have to show," says Harris. $25-$35, 7pm Thu, Nov. 5, Showspace, 101 S. Santa Rosa St., fashionsa.org.

Reality television junkies may have already noticed a familiar face lurking in The Anthill, the new Stone Oak boutique owned by none other than Project Runway All Stars winner and Project Runway contestant Anthony Ryan Auld. Known for his definitive shapes and bold fabric selections, the fan favorite saw the Alamo City as the perfect spot to finally set down roots after his whirlwind competition experience; now, he's ready to wow his new hometown audiences with his premiere FWSA presentation, The Darkness and the Light. "A new world. A new chance. A different adventure ... One never knows what danger lies lurking in the wood," teases Ryan of the upcoming collection. $25-$55, 7pm Fri, Nov. 6, Showspace, 101 S. Santa Rosa St., fashionsa.org.

In San Antonio, the name Samantha Plasencia is synonymous with fashion. From her first place win at University of the Incarnate Word's Cutting Edge Fiesta fashion show, to the Moda Next showcase, to a stint on Project Runway, to numerous showings at FWSA, her "urban chic with a bit of edge" looks have consistently been in line with the fashion world at large.

Constantly evolving, her upcoming collection combines her signature streetwear aesthetic with experiments in non-fabric materials for waterproofing and sustainability. Expect to see more men's designs this time around: "I got inspired for this line by a lot of hip-hop artists that are taking fashion to a more simplistic yet still cool look," Plasencia explains. $25-$55, 8pm Fri, Nov. 6, Showspace, 101 S. Santa Rosa St., fashionsa.org.