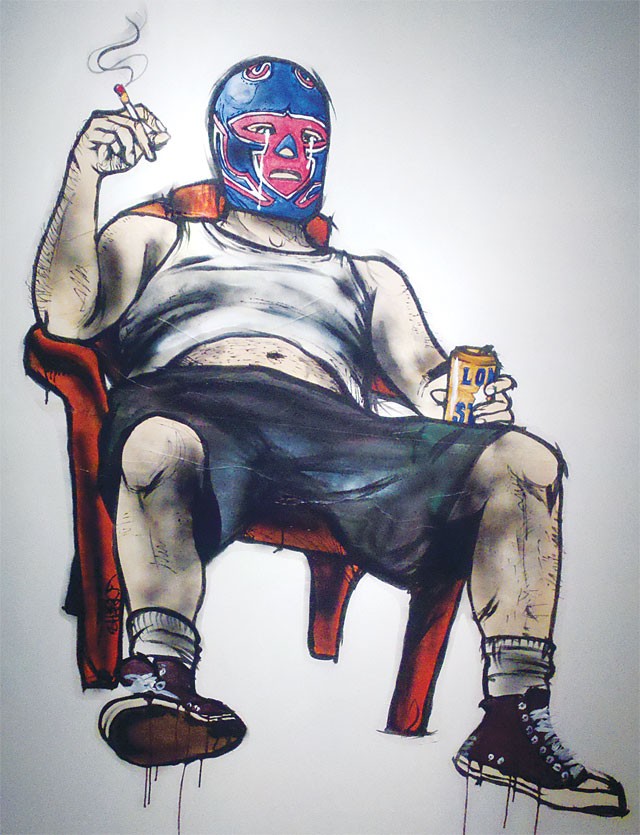 Poster art, often abetted by a healthy addition of stencil work and free-hand painting, has taken over the streets and gained press worldwide — well-known practitioners like Banksy and Shepard Fairey have gained notoriety and wealth. But here on the streets of SA, it’s still mostly a graffiti and old-school mural town. A group show sampler of poster art offers an introduction to the internationally popular technique in “By Permit Only,” on view at Guadalupe Gallery through November 19. The 11 artists chosen for the show are mostly from the studio world, so don’t expect the usual street handles that graf writers use.

It may seem like a new fad to some, but postering has been around at least since the 1600s, when broadsheets were pasted to walls with wheatpaste in England and Holland during the early days of newspapers. Two centuries later, Toulouse-Lautrec’s posters advertising the Moulin Rouge cabaret were stuck to walls in Paris with the same mix of flour and water that has plastered adverts for punk clubs, country palaces, and political candidates on walls everywhere.

“Everywhere” seems to be the theme of the show, which has allowed artists to place their works inside the gallery like erudite installation pieces, and on the outside walls of the Guadalupe like agit-prop.

Rodolfo Choperena’s untitled abstract panels of bent colored stripes fill an inside wall of the gallery and also dominate the wall outdoors fronting Brazos Street. Along with Joshua Bienko’s dance-step maps (replete with instructional numbers and arrows) on the inside gallery floor and outdoor concrete, Choperena’s works evade the politicized message of much street art to take territory in a more benevolent way. Yes, it’s eye candy, but much of the urban streetscape is drab or worse.

Three pieces by Vincent Valdez show both the appeal and limits of the medium. Valdez is known for his mastery of realism; two pieces from his series of monumental boxers have been photocopied and printed in even larger form, along with a sample from a new series in graphite that chronicles military rituals of burial. The original drawings have stunning impact when viewed from a distance, and a wonderment of detail is revealed up close. The poster versions on display, however, suffer from the inevitable softening of line and loss of detail that accompanies photo-enlargement.

Such transformations are expected and planned for in commercial billboard art, which is only meant to be viewed from a distance. In some of the other works in the gallery, like Gabriel Bernal’s drawing of a beer-drinking Lucha Libre wrestler, or his Banksy-like portrayal of a squatting panhandler, the roughness of the prints adds a patina of street cred.

With the exception of Bernal, none of the artists, many whom have exhibited at Artpace and other high-art venues, have worked in wheatpaste before. This brings a freshness — like a sculptor’s first experiments in the fast work of monotype — to the stylistically scattered show.

One of the strengths of poster art is its ability to easily repeat a work, paste it up about town and the world. Posters are multiples. With the exception of Ethel Shipton’s Walk-ins Welcome, a multiple collection that introduces the exhibition, all the pieces in and about the gallery are singular, if variants on a theme. Hopefully SA street artists will take this show as an instruction manual and paper the town soon.