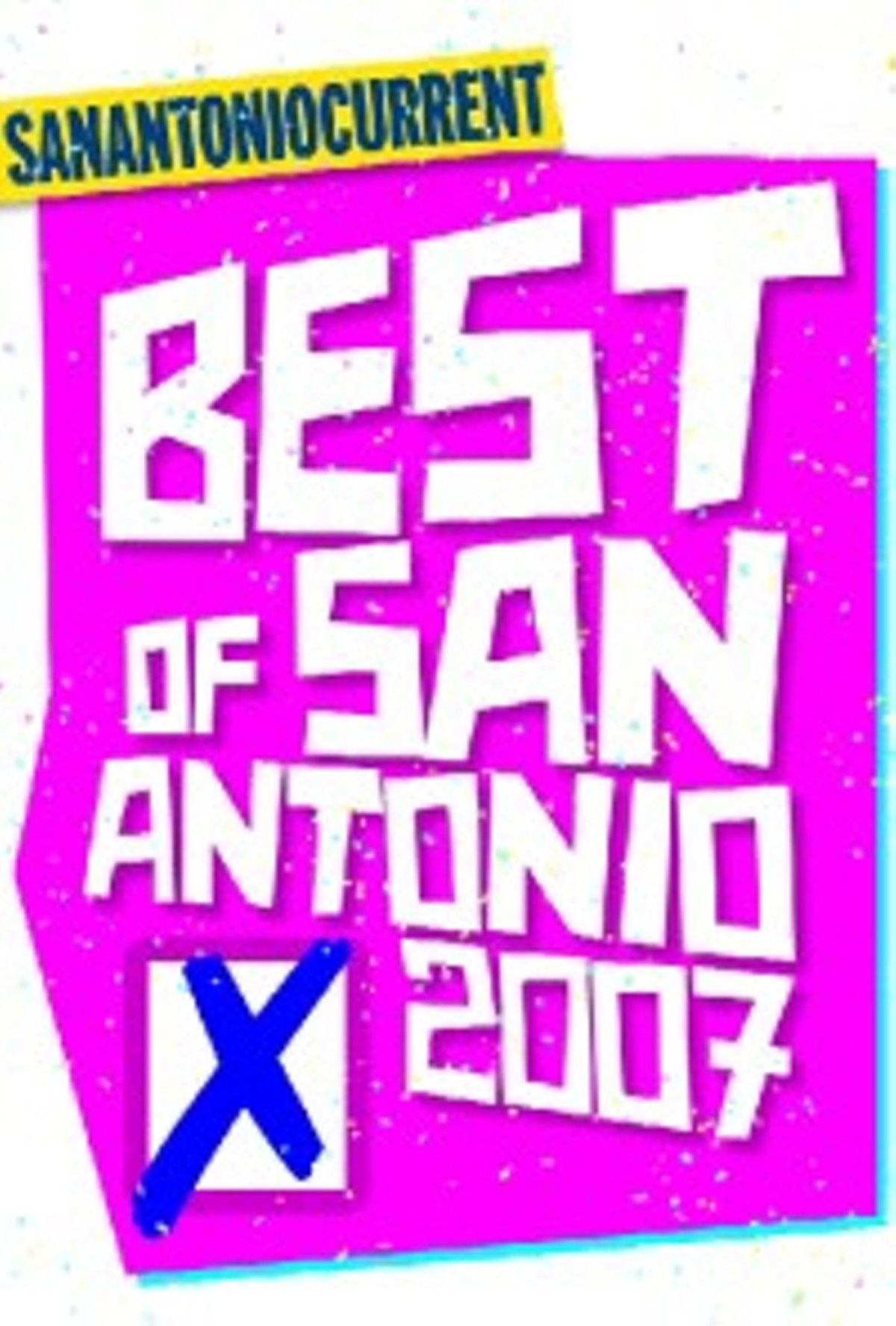 Sometimes the Best Of SA critic is a spider, spinning a web of pretty but ephemeral words, hoping to snag at least one butterfly that she can show off to readers: See, this bug is a truly spectacular bug, and it grew from larval form right here in the Alamo City! Never you mind the empty blue sky around it.

These past 12 months (give or take 6) I’ve felt more like a semi grill catching nutritional, crunchy, glittery art creatures wherever I turn (critics of the critic may put the pedal to the metal on that metaphor; thank me later). Our readers thought so, too, turning in close calls in a number of categories. Many of the winners were also our favorites: Ken Little’s Hometown Artists’ Rodeo, founded at seasoned campaigner the Cove last fall; Bettie Ward’s one-woman exhibition at the Southwest School of Art & Craft; As Filthy As it Gets at Jump-Start.

Our critics’ picks in turn try to acknowledge notable people and events that experience has taught us don’t submit easily to the vote: The most egregious example of censorship; the most striking graffiti; our favorite new art and theater faces.

Even then, we’ve neglected significant developments that deserve your and our approbation: The City’s Cultural Collaborative initiative has completed or begun more than 70 percent of its plans, including a forthcoming study for a performing-arts complex; the San Antonio Museum of Art hired a full-time curator for its contemporary and modern collections. David Rubin has wasted no time reaching out to the local artist community; and the McNay Art Museum has begun construction on a 45,000-square-foot addition that will hold its own with any swanky Houston or DFW monument.

So, in many ways, the Best of San Antonio cultural awards this year belong to the people, who have made the commitment to create a nurturing habitat for creative butterflies of every breed, and are realizing a more beautiful, enriching, and diverse city because of it.

Any successful art scene runs on a combination of fossil fuel and renewable resources. The former in this case is represented by Blue Star Contemporary Arts Center, Sala Diaz, and other mainstays of SA’s creative community. The latter analogy applies to the fresh faces that pop up every year, straight out of the UTSA MFA program or returning home after years abroad, and begin throwing new ideas and enthusiasm into the collective art generator. In the past couple of years, the Current has tipped its hat to Triangle Project Space and Unit B Gallery, which consistently produce shows of museum caliber and street sensibility.

This year, the Best Fresh Face honor goes to Leslie Raymond, who moved to San Antonio in 2005 with husband and collaborator Jason-Jay Stevens to take a position as Assistant Professor of New Media at UTSA. In that short year-and-a-half, Raymond and Stevens have catalyzed the local video-art scene with Potter-Belmar Labs’ improvised symbiosis of sound and image. Raymond has used her UTSA connections to support public lectures such as this month’s “Art at the Intersection of Art and Technology” by Patricia Olnyk, and co-produced the first Green Eggs and CAM Awards and the Video Lounge during last year’s Contemporary Art Month. P-B remains available for public actions, too, jerry-rigging a show at the Josephine Street river pocket park for last month’s Bike Gang Summit. You can catch their work in installation form at Three Walls through the end of the month (212-7185 to arrange a viewing), and appreciate Raymond’s aesthetic at Sacurrent.com, where she is curating semi-monthly video-art clips.

Far better this category didn’t exist, but far duller, too, I suppose. Art labeled controversial was attacked with a gusto and ingenuity seldom seen in these parts, and not a single censor seemed to be cynically building political bona fides — not even State Representative Boris Miles (Democrat from Houston), who absconded with two paintings critical of the death penalty on display in the Capitol Annex and locked them in his office. It was all about passion.

Centro Cultural Aztlan took a page from Bush & Co., and stood firm in the face of a National Coalition Against Censorship petition asking the Westside cultural-arts organization to restore Anna-Marie Lopez’s pagan “Virgin” to the annual Virgen de Guadalupe show.

But Eastside community lion Nettie Hinton put rhetoric-minded oppressors to shame when she conned City-sponsored work crews into painting over portions of the Nolan Street Clogged Caps mural, created by a team of national artists during last summer’s Contemporary Art Month festival. Nobody got the neighborhood association’s permission, claimed Hinton. Did too, said Councilwoman Sheila McNeil, who then sort-of-maybe left it up to the association to negotiate a replacement mural. Hinton took the ensuing confusion as an opportunity to practice active leadership; the result is that the mural is now partially painted over and taggers have accepted the Kilz-covered open invitation. The new ersatz collaborative work could be titled “Public artifice.”

Take the relatively smaller crowds as a good sign — after all, FL!GHT Gallery Director Justin Parr (full disclosure: freelance photog for the Current since January) moved out of the Blue Star Art Silos in part to get away from the party atmosphere. His shows are still punky in the best way, though, beholden to no hot-new-thing mania or aesthetic but his own. Count on the neighboring one9zero6, operated by Benavides Framing proprietors Andy and wife Yvette, to offer a more-narrative visual counterpoint, and together they sponsor live music for many of the openings. Salon Mijangos next door doesn’t open every Second Saturday; it operates according to the whims of renowned abstract painter and instructor Alberto Mijangos, whose predelictions thankfully include experimental music and art collaborations. For yet another aesthetic tangent, step across the street to the legendary Joe Lopez’s Gallista Gallery, where the shows usually have a Chicano perspective, and the artist studios out back — including Burro Artist L.A. David’s, the closest you’ll come to a true psychedelic experience in this bourgeois age — maintain a steady, laidback buzz throughout the evening.

San Antonio’s theater community is bedeviled by its audience’s apparently boundless appetite for feel-good endings and catchy tunes. Companies with electrical bills and aging buildings to maintain either do their best to pimp responsibly (I Am My Own Wife one month, Enchanted April the next) or become codependent enablers indulging a personal weakness for quasi-historical jukebox musicals (I believe we’re now into the ’70s at the Josephine).

Our local colleges and universities fill some of the void, dabbling in experimental stage design and controversial playwrights, but AtticRep is unique in that it marries some of academia’s best assets (institutional support for overhead, facilities) with a proactive mission to engage professional actors and audiences in the pursuit of theater that matters. It’s been an intense ride so far, beginning with Harold Pinter’s searing critique of state-sponsored terrorism, One for the Road, followed by Adly Guirgis’s encyclopedically ambitious dark comedy The Last Days of Judas Iscariot, and now, equal-opportunity sadist Neil Labute’s Fat Pig. In case viewers were unwilling or unable to ferret out Pinter’s analogies, each One for the Road performance was followed by a presentation and discussion of curent human-rights horrors such as Abu Ghraib.

OK, there was a little musical tribute to Irving Berlin last fall, written by Hedgepeth and performed at the McNay. But in the context of AtticRep’s inaugural season, it looks like a well-placed reminder that not all human beings are sociopaths.

Considering Imus just got fired, I’m not sure if this statement’s appropriate or not:

Of all the world’s babies, Asian toddlers, generally speaking, are the most adorable. There, I said it. I’m a racist. I’m sorry.

But just look at “Tricycle Girl.” (Aren’t you cute? Aren’t you? Yesh, yesh, you are!) When we found her, and her mirror-image twin, stenciled almost life-size on the side of our building, we all fell in love. And we all mourned when Jesse, our maintenance master, had to paint them over.

“Tricycle Girl” is one of the more recent works by Scotch!, the stencilist who brought San Antonio the crotch-grabbing Star Wars stormtrooper, the pantsless Laurel & Hardy, and Ron Burgundy’s torso. Here’s how Scotch! explained it when we tracked him down via Myspace (Myspace.com/el_scotcho):

“I got the tricycle girl from a photograph. I think the tricycle girl is just about innocence since you really don’t see that in street art in this town. Also, it seems to be the only large stencil `I have` still in perfect shape, considering all the use i put on it!”

Yes, it took 10 years of sweat, tears, and nailbiting. And if I hear Henry Muñoz say one more time “It’s the second time Mexicans pitched a tent at the Alamo … and won!” I’ll pinch his rosy cheeks. But you have to give the founding chairman of the Alameda National Center for Latino Arts and Culture his due: he had the cojones to buttonhole the Smithsonian at the right time. You’ve ignored Latino America too long, he told them (with the backing of a Smithsonian
-commissioned study), and San Antonio has the perfect mea-culpa opportunity for you. And so began a long decade of renovating the Mexican business building on Houston, studying the historic black-light murals at the Alameda Theatre, and scraping together the cash to recreate a corner of El Mercado as a glistening pink-and-silver tribute to MeChicano past, present, and future.

We should probably thank tireless Executive Director Ruth Medellin, and Toyota, too, for helping Museo major funder Ford see the light, but today we’re tipping our hat to Muñoz: The Museo Alameda may not have been the first Smithsonian Affiliate to open its doors, but it is the first one on record, and we look forward to future distinction for our branch of the country’s museum and the Kennedy Performing Arts Center-affiliated Alameda Theatre.

San Antonio’s theater scene crackled this year, due in no small part to original work such as Annele Specter and Monessa Esquivel’s As Filthy As it Gets (a Readers’ Pick) and John Poole’s The Taming of the Shrew — and while they realized their ultimate form as stage productions, like our honoree in this category, they began life as a written work (OK, maybe not As Filthy As it Gets). Gregg Barrios isn’t the only local playwright to give voices to actors in other cities, either, but his newest script, Rancho Pancho, received a particularly noteworthy honor: It was the main event at the 21st Annual Tennessee Williams/New Orleans Literary Festival, where it was introduced by John Waters and reviewed well by local critics. Fabulous enough that the festival  hosted Barrios and cast, but it was a spirtual homecoming for the play, which is about the stormy relationship between Williams and his Mexican-American lover and muse Pancho Rodriguez, and is set in part in the Crescent City where the two men lived for a while.