The proposition passed with more than 85% voter approval. 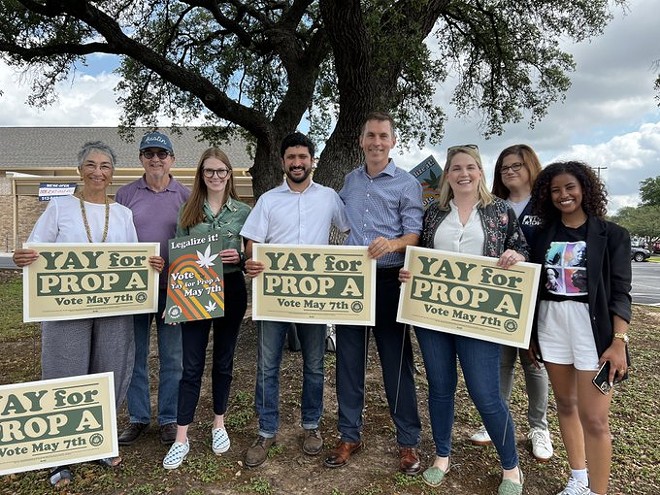 Twitter / @JulieOliverTX
Prop A supporters including Democratic U.S. House candidate Greg Casar (fourth from left) pose with signs.
As San Antonians passed the city's largest-ever bond, it may have been easy to miss that voters just up Interstate 35 also made ballot-box history this weekend.

On Saturday, Austin voters approved Proposition A, which halts low-level cannabis arrests and bans police from using no-knock warrants. The measure passed with more than 85% approval.

Prop A — dubbed the Austin Freedom Act — would make law an Austin police policy put in place in 2020 under which officers would no longer arrest or even cite people carrying small quantities of weed.

"The Austin Freedom Act is proof positive that when we put popular, progressive policies in front of voters, we can bring thousands of new voters into the fold and mobilize the electorate behind important change," said Julie Oliver of progressive voter-mobilization group Ground Game Texas in an emailed statement.

Ground Game Texas landed Prop A on the ballot after a petition drive that collected 34,000 signatures, or 10,000 more than required under local ordinance. Austin City Council voted in January approve the initiative for the ballot.

"We look forward to the success of similar ballot campaigns across Texas that will help register and mobilize thousands of voters behind popular progressive policies like workers, wages and weed," Oliver said.