Hemp advocates promised the Texas Legislature the crop was drought resistant. The 2022 drought has proven otherwise. And farmers are abandoning the nascent market. 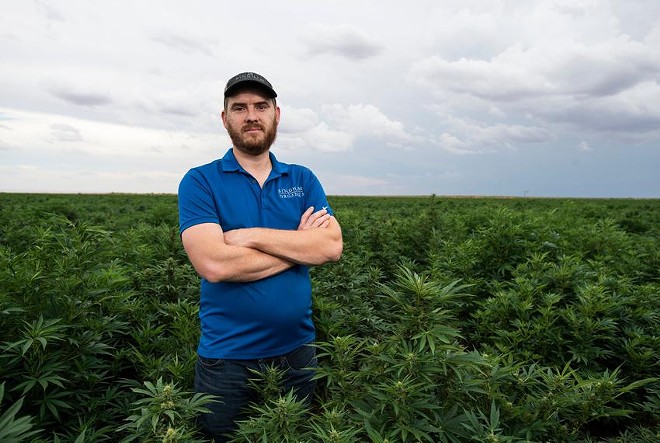 Texas Tribune / Justin Rex
Kyle Bingham, who grows hemp at Bingham Family Vineyards, on Aug. 29, 2022, in Terry County. Though Bingham has had some success with the hemp crops he’s planted, he said he quickly learned that hemp was not drought tolerant.
When the Texas Legislature legalized hemp in 2019, state Sen. Charles Perry called hemp “the hot crop” — a drought-resistant lifeline for farmers.

It got by the Senate and the House with unanimous votes. It had the backing of Agriculture Commissioner Sid Miller.

“Allowing the Texas Department of Agriculture to create an industrial hemp program here in Texas will give Texas farmers an exciting new opportunity to thrive — and that’s something everyone should get behind,” Miller told The Texas Tribune then. “It is all about Texas farmers and ranchers and seeing them prosper.”

But since its legalization, farmers have lost interest in hemp, especially the kind grown for fiber and grain to make clothes, textiles and paper. Those who invested have yet to see returns and say hemp, like other crops, is struggling across the state during one of the driest years on record. Farmers across Texas are having to cut their losses by abandoning failing crops to save valuable resources. And with so much at stake, some farmers aren’t willing to risk investing in hemp.

“The interest is not there with farmers,” said Kyle Bingham, the president of the Texas Hemp Growers Association. “They do not want to waste time, money, land or anything on hemp right now.”

And as hemp production struggles to take off, farmers are still straining to make profits, hitting rural communities that depend greatly on the agriculture industry.

This year’s drought was the first serious weather test for Texas’ emerging hemp industry. And by all measures, hemp planted in Texas soil hasn’t been able to withstand the extreme conditions.


“To say this is a drought-tolerant crop is not accurate,” said Bingham, who grows industrial hemp along with grapes on his Meadow farm, southwest of Lubbock. “We can grow dryland cotton on a year like this when you never have any success with the dryland hemp crop.” 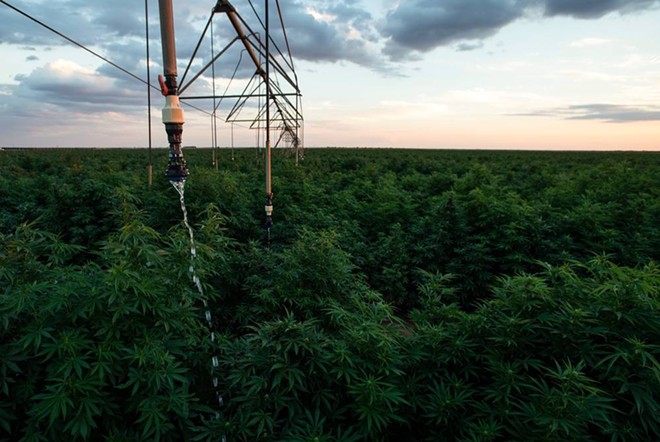 The state is seeing its driest year since 2011, with more than 76% of Texas facing drought conditions, according to the U.S. Drought Monitor. It’s had devastating impacts on Texas farmers who are reporting the worst crop losses in the country — yields are down 68%, according to a summer American Farm Bureau Federation survey.

Drought can stunt the growth of crops because less water and soil moisture are available — and hemp is no different.

Farmers saw industrial hemp fail because the soil hardened in the dry heat. Hemp can also be grown for cannabidiol or CBD, in which case it is grown in greenhouses and needs even larger amounts of water than industrial hemp.

“In that first growing season in 2020, a lot of our farmers, especially the ones growing outdoors, are the ones who noticed how much water it really took for these plants to really thrive,” said Ilissa Nolan, the executive director of Texas Hemp Coalition. “Especially when this is the type of plant that’s grown more so in the summer months where it’s just ridiculously hot in our state.”

Farmers plow the land to ready it for sowing. But plowing in a dry field where the soil is rock-hard is difficult. Owens waited to plant the crop until later in the season, and when he did, he learned that the crop needed a lot more water than previous years.

“A lot of the guys I know couldn’t even believe that we got it plowed because they thought it was going to be too rock-hard to break up,” said Owens, who — unlike most — grows hemp outdoors for CBD. “But we did and it worked out.”

For hemp grown for CBD and for fiber, optimum daytime high temperature for production is 70 degrees to 80 degrees, Calvin Trostle, the statewide AgriLife hemp specialist said. But temperatures across the state this summer broke record highs and were often in the triple digits, compounding conditions that led to low crop yields.

When asked about the claims that hemp was drought resistant, Nolan, with the Texas Hemp Coalition, laughed. The characterization of hemp as drought resistant was based on trials in Kentucky and Colorado, she said — states with very different climates.

Texas is another ballgame.

Farmers looked to hemp as a 'lifeline'

The U.S. Congress passed the Agriculture Improvement Act of 2018, legalizing hemp at the federal level as long as it did not contain more than 0.3% of tetrahydrocannabinol, the psychoactive element in marijuana known as THC. 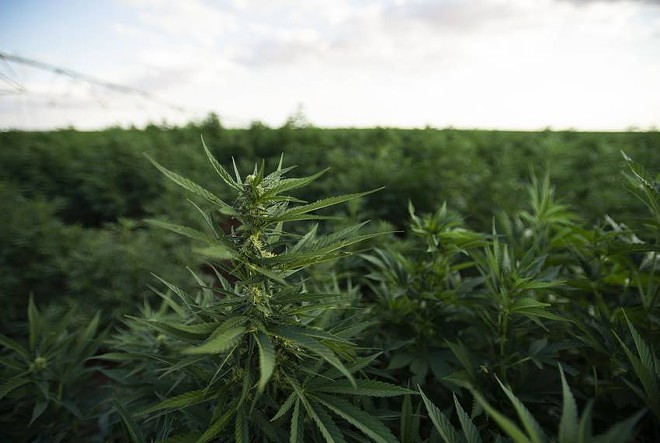 Texas Tribune / Justin Rex
A portion of the hemp crop at Bingham Family Vineyards in Meadow. “To say this is a drought-tolerant crop is not accurate,” farmer Kyle Bingham said.
But it wasn’t just about regulation — advocates envisioned a booming hemp industry in Texas. At one hearing, the House Agriculture and Livestock Committee heard testimony about out-of-state success: In Kentucky, a hemp pilot program was paid $3,000 to $5,000 for an acre of hemp.


“I personally believe Texas will become a leader in this arena since it’s already a big agriculture-producing state to begin with. Farmers have been looking to this bill as a lifeline to save their family farms,” Lisa Pittman, an attorney specializing in cannabis law, said.

The agriculture industry had been facing an economic downturn. Even cotton — a crop long seen as a strength in Texas agriculture — was struggling. The legalization of hemp was welcomed as a possible solution to the downturn and even an alternative to cotton.

Waning interest in the crop


Hemp licenses are down, according to industry experts. The state agency responsible for tracking that data did not respond by publication to multiple requests from The Texas Tribune.

The challenges of extreme weather conditions were among the reality checks that have hit the few farmers who have planted the crop.

The legalization of hemp was accompanied by an influx of hemp growers eager to cash in on the new crop. But the demand couldn’t keep up with a gold rush mentality — and Texans were flailing to find buyers after they harvested the crop.

“It resulted in an oversupply crisis, it cratered the price of hemp flower and CBD, and that left a lot of 2018, 2019, 2020 farmers with inventories they weren’t able to sell,” said Jody McGinness, the executive director of the Hemp Industries Association.

And there still isn’t a clear market for hemp in Texas. Farmers are finding little to no established processing facilities or consistent buyers looking for Texas-grown fiber or grain. Many retailers are still sourcing their fiber and grain internationally to get the goods at a better price point, said Leah Lakstins, who works with hemp retailers and farmers to develop Texas hemp businesses.

And as the hemp industry sees setbacks in its infancy stages, fewer farmers are willing to invest their limited resources in the crop. The 2019 state bill legalizing hemp in Texas was supposed to be a win for farmers, but the farmers are now only a slice of the industry. The majority of people in the hemp industry are not farming as their primary source of income and are growing hemp for CBD, according to a USDA survey.

“The farmers have been doing this for a long time and they just recognize that this is too volatile of a market for us to make sense to continue working in,” said Bingham, the farmer growing industrial hemp in Meadow.

Despite all of this, leaders in the hemp industry maintain optimism that the crop can take off so long as farmers regain interest in industrial hemp and introduce it into their row crop rotations. Farmers can work with hemp’s genetics to better tolerate drought conditions, for example. 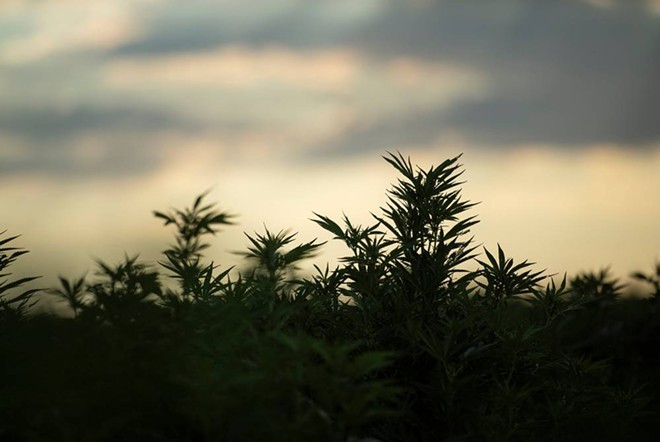 But with licenses down, the industry must build an appetite for the crop in a fragile industry in which taking a risk with hemp has already hurt many farmers.


“We need to find a way for farmers to be confident and have absolute surety that they’re going to be able to make a profit that they can rely on,” McGinness said.

Bingham said time is running out for the hemp industry. Hemp production has “promise and potential” in Texas, he said, but the industry has about two years to build a market for hemp before farmers bow out altogether.

“If we don’t do it right, we will squander this opportunity,” Bingham said. “And if we ever try to come back and rebuild this, it will be so much more difficult to build the industry.”

Jayme Lozano contributed to this story.