While marijuana reform has emerged as a key issue in the midterms, it's unlikely to see much movement under Texas' political status quo. 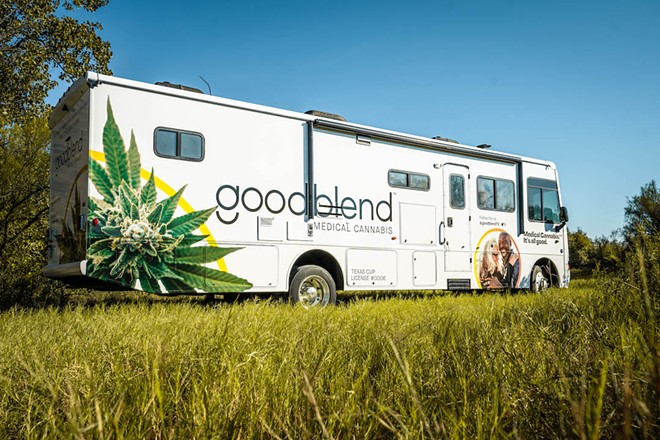 Courtesy Photo / goodblend Texas
Medical cannabis dispensary goodblend Texas is taking its Cannabus to San Antonio and other cities on a voter-mobilization tour.
One of Texas' three approved medical pot suppliers is taking its mobile dispensary — dubbed the CannabBus — on a statewide tour urging residents to make marijuana reform a major issue in the midterms.

Cannabis company goodblend Texas, will launch its "Ride For Your Rights" tour in Austin this Wednesday and make stops in San Antonio, Abeline, Houston, Fort Worth, Plano, and Nacogdoches before rolling things up in Killeen Thursday, Oct. 20.

The San Antonio stop is slated for Tuesday, Oct. 19, and online registration is now available.

Texas updated its medical pot laws last year, adding post-traumatic stress disorder and all forms of cancer to its list of qualifying conditions. However, fewer than 30,000 patients are registered in the program, considered one of the most restrictive in the U.S.

"The medical cannabis program will never change unless Texans stand up and make it change," said Reece Fulgham, CEO of Parallel, goodblend's parent company, in an emailed statement. "The 'Ride For Your Rights' CannaBus Tour was designed to educate and galvanize support for expanding access to Texans in need. We hope the support rallied will convince Texas policymakers that there's strong public demand for real, lasting change."

While expanding medical marijuana and legalizing its recreational use have emerged as key midterms issues, neither is likely to build traction under Texas' political status quo.

Republican Lt. Gov. Dan Patrick has repeatedly used his control of the Texas Senate to block reform legislation. What's more, both Gov. Greg Abbott, a fellow Republican, and the Texas GOP remain opposed to legalizing weed for recreational use.