20 Food and Drink-Inspired Fiesta Medals You Need This Year

Send a News Tip
With less than a week left until the biggest party of the year starts, Garrett Heath, of SA Flavor shared some of the most sought-after food and drink-inspired medals of 2017. Get ready to Fiesta on April 20, San Antonio! Some of the medals may be sold out, so be prepared to make a trade.

1. Paleta Cart by Amanda Infante
You know it's spring in San Antonio when you hear the ring of the paleta cart bells. Local maniac Amanda Infante created this medal to celebrate the frozen treats. The medal is $10 with a dollar from every sale going to Girls Inc. San Antonio and can be purchased at store.saflavor.com. 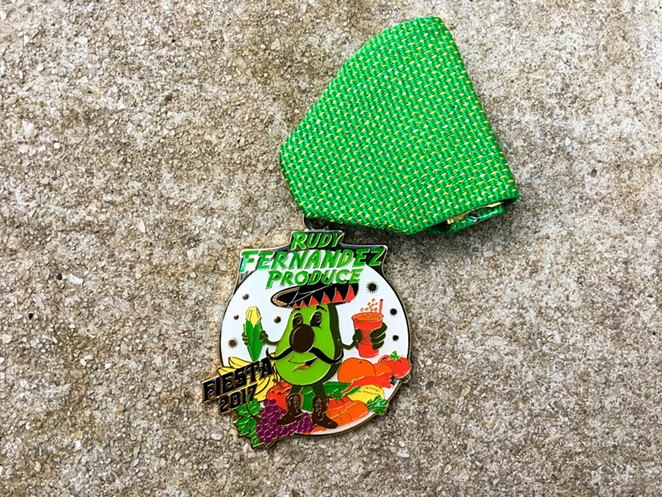 Facebook/FiestaMedalManiacs
3. Jim's Restaurants
This medal is super cute, with all the Jim's favorites surrounding the edge in a very Fiesta Wreath style. The coffee dangle is an added bonus in the middle. $5 at all Jim's Restaurants, I had to get one for my daughter as well.

Facebook/FiestaMedalManiacs
4. Rico's Products
Who doesn't love the country's favorite nacho cheese? This bright medal is kind of two parts — below is the psychodelic nacho truck complete with jalapeños and above is a medal at the top of the ribbon with the cheese droplet logo. The medal can be purchased online or in the store for $10.

Image courtesy SA Flavor
5. El Borracho by SA Flavor
Everyone knows the tradition of stacking cups at NIOSA and Oyster Bake, so I decided to memorialize it in my personal medal with this Lotería Card that plays on El Borracho. Medals are $10 with a dollar going to Snack Pak 4 Kids and can be purchased at store.saflavor.com.

Facebook/FiestaMedalManiacs
6. Chris Madrids
Who doesn't love the macho burger? This San Antonio staple is celebrated on a 2017 medal by Chris Madrids that commemorates the 40th anniversary of the store. $10 and proceeds benefit SAMM Ministries.

Facebook/FiestaMedalManiacs
7. Concha Medal by Sweet Craft Jewelry
Sweet Craft Jewelry is known for making earrings, so why not a medal? This pan dulce looks super sweet and is a must have for fans of the Mexican pastry $10 at Lolita & D.J. Bakery, 1712 Blanco Road.

barbacoapparel.com
8. Come and Take It Elote by BarbacoApparel
Since Fiesta is a celebration of the ultimate Texan victory at San Jacinto, it makes sense to have medals that symbolize the battles for Texas Independence. BarbacoApparel did just that, taking the Battle of Gonzales flag and swapping out the canon for an elote. Available for $8 online in the BarbacoApparel store.

9. Taco Pacman by Tony Infante
This is the medal for all 80s enthusiasts! Instead of pellets and fruit, Pacman is chasing down tacos and chiles. Made by Tony Infante, $1 from every medal sold goes to benefit Southwest Voter Registration and Education Project. Medal is available at store.saflavor.com for $10.

Facebook/FiestaMedalManiacs
10. Pan Dulce by Vara Chevrolet
Vara Chevrolet featured a platter of pan dulces in their 2017 medal with the tagline "Vamos con Vara." They were available at the dealership for $10 with all proceeds going to St. PJ's Children's Home.

Facebook/FiestaMedalManiacs
11. Fry Calavera by McDonald's
Even though they're a big box store, the team who worked on the McDonald's medal certainly knows the local culture. The medal features a calavera with eyes made out of burgers and a mouth made out of fries. The medals are $7 at local Mickey Ds and proceeds go to the Ronald McDonald House. 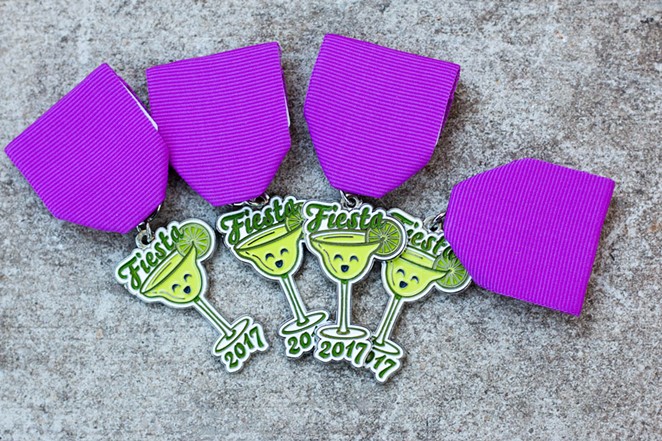 Image courtesy SA Flavor
12. Miss Margarita by Christina Liserio
2017 has local blogger Christina Liserio of Born and Graised SA focusing her "research" on margaritas. So she decided to personify the libation as Miss Margarita. Available for $10 at store.saflavor.com, a dollar from every sale goes to benefit The Chow Train to help feed SA's homeless population. 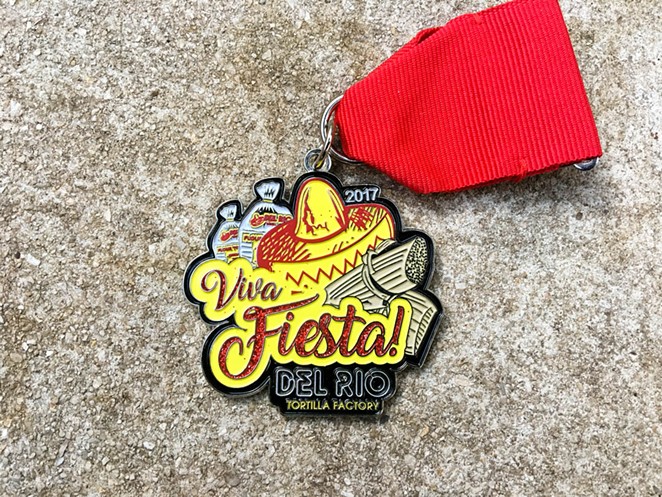 Facebook/FiestaMedalManiacs
14. Rolando's Super Tacos
This medal captures the enormity of a super taco at Rolando's! Fans of the Hildebrand restaurant know that one of these tacos is more than a meal! This Fiesta medal is $10 and available at their store on 919 W. Hildebrand Ave.


15. Whataburger
What-a-medal! Whataburger is back with another fantastic 2017 Fiesta medal that features sparkly fries and both varieties of ketchup (that's Fancy and Spicy for all you non-Whatafans). The medal has already sold out in their online shop, so you better have something good to trade to get one.

16. St. Arnold Brewing
While not located in San Antonio, I know that plenty of people enjoy the brews of St. Arnold's. This year's medal features their eponymous Saint with a classic 8-bit feel. St. Arnold's is giving these medals away, but you have to sign up for their local newsletter to find out where they'll be. 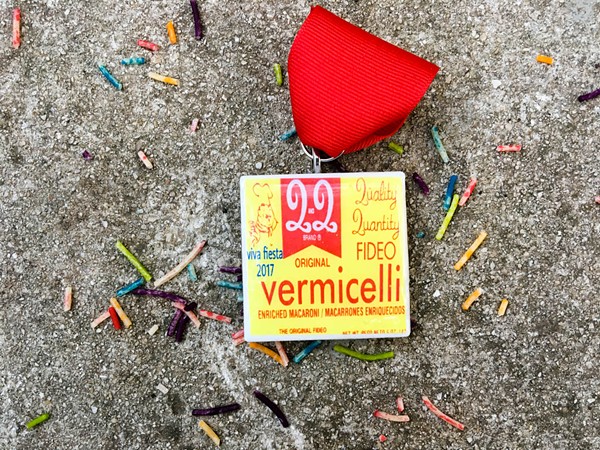 Image courtesy SA Flavor
17. Fideo Medal by Gorda Fabulosa
Roxanne Quintero, the woman behind Gorda Fabulosa, decided to make a handmade medal that was Puro San Antonio. The medal is created on a tile and has the Vermicelli logo on the front. But the true festiveness of the medal was how it was packaged with confetti colored fideo. She sold it for $8 and it's sold out now, but hopefully she will make more soon.

Facebook/FiestaMedalManiacs
18. Bakery Lorraine
When you think of Bakery Lorraine, the first two things that come to mind are macarons and classy design. The bakery combined both of these things with their 2017 Fiesta medal by artist Jamie Stolarski. It's available at each of the bakeries for $10.

Image courtesy SA Flavor
19. San Antonio Cocktail Conference Medal
If you're looking to score some highfalutin cocktails AND medals, look no further than the Got Medal event coming up on April 18. Stroll the bars of Houston Street (Bohanan's Bar, Esquire Tavern, Dorregos at Hotel Valencia Riverwalk, The Palm) and get a Fiesta medal to boot! Bohanan's will be giving away this medal from the Cocktail Conference that showcases the official drink of their 2017 event, the High-Jinx.

Facebook/Big Red
20. Big Red Fiesta Medal
Big Red, the "official" soft drink of San Antonio had a glittery Lotería inspired medal for 2017. Designed by high school student Joely Montoya, the card features a can of the soda with "Rojo Grande" underneath. The number 37 symbolizes the year that the drink was first made. Only 250 were made and given away in an online contest at the beginning of April, making this medal another hard-to-find for maniacs out there.