502 Bar: Bridging the gap with sound 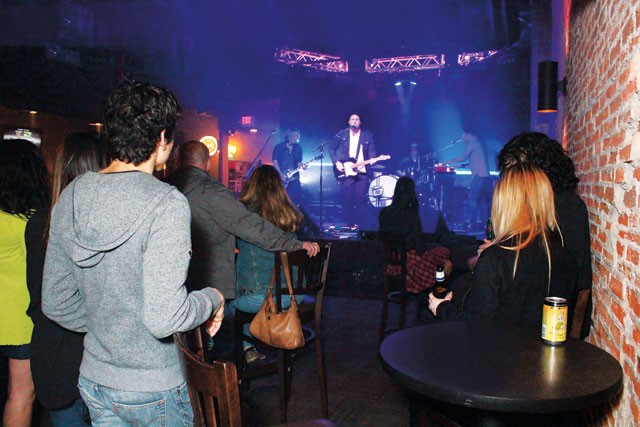 I have been to 502 (and nearly every other bar in this town) enough times to know that it's one of my favorite music venues in San Antonio. This wasn't the case when it was formerly Wise Guys Bar & Pizzeria, back in the heyday when you could smoke inside and watch cover bands such as Drive play Radiohead's "Creep" enough times to make me wanna creep straight out of there (let it be known I am customarily fond of Radiohead, but there are only so many covers of that song one can take).

I'm aware that some people enjoy that kind of ambiance. However, I am happy that 502's presence (since October of 2011) has brought phenomenal sound, noteworthy local and touring acts, and a marvelous beer selection to the "Bitters Triangle" The Falls, Bitter End, and luckily, now 502 as the latest addition. I've often referred to Bitters Road as an imaginary boundary that too frequently separates partygoers north and south that line that divides the opulence of Stone Oak nightlife from the bars overflowing with the skinny jean wearing-tragically hip-Lone Star chugging indie crowd, and everything in between.

Right on the cusp of this imagined border, 502 could be considered somewhat of a buffer zone bar, connecting the gap between the divergent revelers. Recently, I was reminded of this notion when I caught the dazzling Dallas-based violinist Daniel Hart, with his equally enchanting band. Definitely a melting pot that Friday night, I was amongst familiar faces from my side of the line, as well as the standard dudebros, chicks clad in what I presume to be their best club attire, a few adorable-just turned 21 new to the bar scene kids, and even a handful of more mature folks that were middle-aged. Everyone seemed to coexist peacefully, some appreciating the caliber of the production of the stage more than others. Enough about the people — now on to the beer, and a bit more about the sound.

The selection of brews should impress the discerning drinker, with such names as Alaskan (I indulged in the IPA that night), Maui and Breckenridge. Although the beer resonates with an enthusiast such as myself, 502 is a full bar and home of the daily "$5 16 oz. Beer & Shot Special," where you can choose from pairings like Pabst Blue Ribbon and Jameson or Dos Equis and SOAH Tequila. I also indulged in one of these offerings, mostly because the bartender sweet-talked me into it after debating whether or not I should. As I said before, this place truly has done a bang up job on providing a stage that musicians, local or otherwise, would be happy to play on. I'm going to spare you all the technical sound jargon (I don't really know what half of it means; reference the 502 website for accurate details), but I do know this: it sounds fucking great in that place.

Don't take my word for it. If you're an unwavering lover of music and a proponent of beer, check it out for yourself. I've seen a lot of memorable shows here, including that one time a bunch of ridiculously talented local musicians decided to get together before the anticipation of the end of the world in 2012 and exquisitely performed Abbey Road in its entirety. A Beatles album cover? That's the kind of cover I can get behind.