A Q&A with Ghostpizza's Miguel Nelson 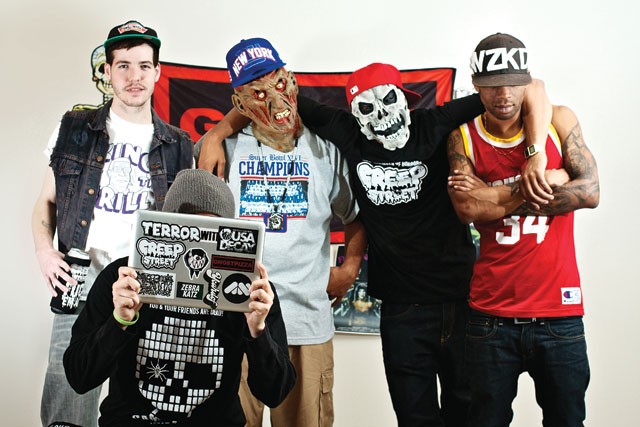 Steven Gilmore
A Nightmare on Creep Street with GhostpIzza.

How do you define Ghostpizza? What are you guys all about?
It originally started as a website, started it by myself, and then I started DJing under the name Ghostpizza but still with the idea that it wasn't just myself. It was a collective, although there wasn't really a collective yet. It was just for fun, I liked the name. And then little by little I started picking up with people that understood the same vibe, understood the same fun mentality — having fun and not taking things too seriously. So basically, it's a group of people that like to have fun. It was something that I was missing, I guess, trying to go out, you know, and not seeing that. It's just fun. I've been lucky to meet talented people that are down and understand the same idea.

You've shut down Hi-Tones twice already for having too much fun…
It's happened twice. The second time … I could be wrong, but I think the lineup was Milli Mars, Western Tink, and Beautiful Lou. And I think Daecos was already playing. It was a secret show. Tink was in town, he's from Austin, we were all together. So we said, "Hey let's just do a show." So I called up Daecos, and said, "Hey you're at Hi-Tones tonight, that's awesome, let's do something together." Daecos was like, "Hell yeah, let's do it." Put out the flyer that day and a lot of people showed up. So did the cops. Tickets were given, citations were given. It wasn't a good thing. They stayed open, the music was shut down. It was too crazy for them. I love Hi-Tones. Really cool people. It's a cool spot.

Milli Mars has been garnering some attention since the release of "The Alarm" video. What's happening now?
The video came out and he got a lot of attention. It landed on thefader.com. Which is, like, huge. As far as I know, we know, I don't think any other rapper from San Antonio has been on The FADER. Not that it matters too much, but that's pretty exciting for us. Currently he's working on a new project. I was there like two, three days ago in the studio and that's exciting. From the release of the video, we've done a lot of shows. No new videos have come out since then (laughs), which is not good, but it's coming soon. With Milli I was really lucky because people got to see that we do a lot more than one type of music. I grew up with rap music. I love it. Doing it here in San Antonio is a little harder. It's not easy. We work 24/7 trying to get it out. We get attention outside of San Antonio, but in our own city, it's like — damn, come on! There's a lot going on here, people.

Let's talk music that you grew up with. First record you bought?
My first record was LL Cool J's "I'm Bad." It was vinyl, I had no idea what I was buying, but I just wanted it. Actually, the only reason I bought it was because it had the Def Jam logo on it. And that was like, really big. Def Jam Records is a huge influence on me and Ghostpizza. Run DMC was big too, Beastie Boys ... that raw energy. I had older cousins that played a lot of rap music. I picked up on it. And it was just again, that fun we don't give a fuck — you know what I mean? Why not? Fight for your right to party. It sounds corny and kind of like a frat boy thing, but I listen to it and it's something inspiring. That's what I want to do. Fight for my right to party. Why not?