A Second Location For Vegeria, Opening For Asado Seafood & Grill and More 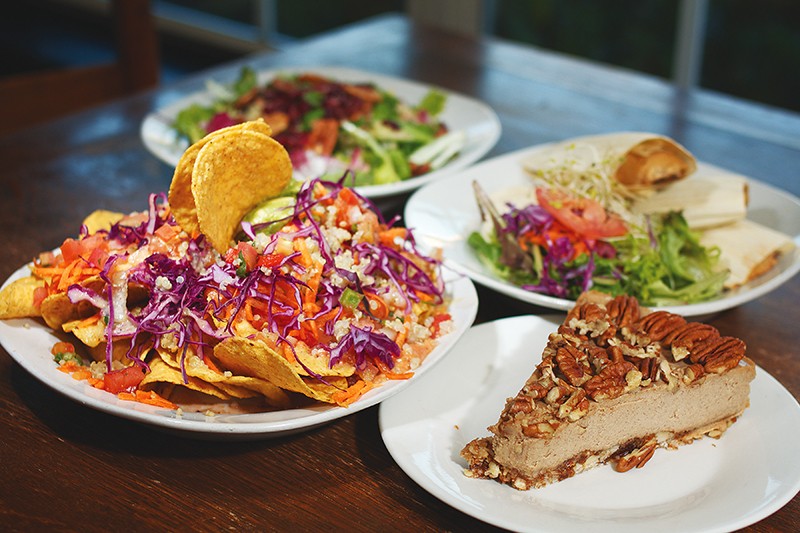 Vegetarians, vegans and lovers of all things fiber can get their chompers ready for the opening of Vegeria Vegan Tex - Mex & American Cuisine's second location. The eatery, opened in mid-2011 by chef-owner Fred-Anthony Garza, has built a following as the one of the few local restaurants that's completely vegan. The new spot at 1422 Nogalitos will be "much bigger, with better signage, and beautiful outdoor seating," according to Vegeria's Facebook page. The original location, at 8407 Broadway, Suite 1, will funnel personnel to the new location once its opens in the next few months.

Asado Seafood & Grill and Asado Lounge inside the Hilton San Antonio Airport (611 NW Loop 410, 210-377-4653) celebrated its grand opening on Friday. The eatery and bar are part of a $12 million hotel renovation. The menu for Asado Seafood & Grill features contemporary cuisine that dabbles in both Latin and Mediterranean flavors, with signature dishes such as grilled salmon, cilantro shrimp marinated in tequila and Asado steaks. The Asado Lounge, on the other hand, features a more relaxed menu of small, tapas-style plates and an updated signature cocktail menu.

Whiskey fans (and really, who isn't?) can enjoy World Whiskey Day on Saturday with a visit to Rebecca Creek Distillery (26605 Bulverde Road, 830-714-4581). Free tours of the distillery will run 4 to 7 p.m. Friday and noon to 5 p.m. Saturday, starting at every hour on the hour.

Chef Johnny Hernandez (El Machito, La Fruteria, La Gloria and countless iterations thereof within Texan airports and Las Vegas) will be the keynote speaker at this year's United States Personal Chef Association Conference, which will take place in San Antonio, July 23-26 at the Hyatt Regency. Another San Anto chef will be in attendance, as well. Chef Luciano Valadez of Taps y Tapas will lead a knowledge and product demo at the conference. For more information, check out uspca.com.

Winners of this year's fifth annual Twisted Taco Truck Throwdown (judged in part by yours truly) include Truck n' Taco's bright red al pastor for People's Choice and Teka Molino traditional take for Grand Champion. The first-ever Freestyle winner went to The Grilled Jalapeño for its bacon-wrapped, three-cheese-stuffed jalapeños in a tortilla. That's hopefully the last time I judge 36 tacos over the course of three hours ...