Owners of El Arroyo are planning a multi-unit expansion across the Lone Star State, starting with the New Braunfels location. 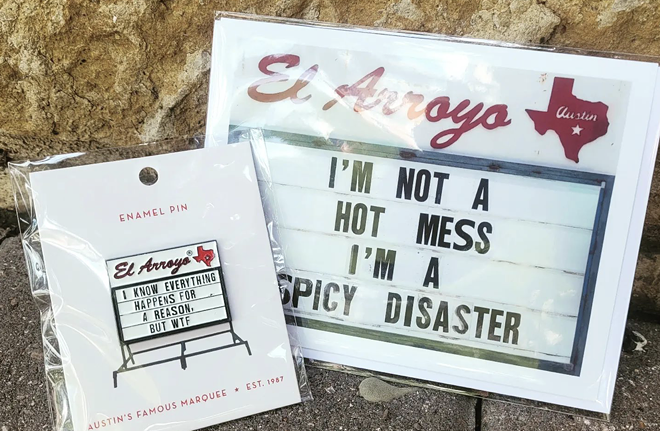 Instagram / luxeapothetique
El Arroyo's hilarious roadside sign is arguably more famous than its food.
Owners of longtime Austin eatery El Arroyo — known for its Tex-Mex fare and hilarious roadside sign — are planning a multi-unit expansion across the Lone Star State, starting with a location in nearby New Braunfels, the Austin Business Journal reports.

Husband-and-wife owners Ellis and Paige Winstanley told the Biz Journal they last year bought Guadalupe River tubing and entertainment company Rockin' R River Rides with a friend, and a two-story structure at the site will be turned into an El Arroyo location.

"It's 10 acres right on the Guadalupe River, below the Gruene Water Tower," Ellis Winstanley told ABJ of the Rockin' R site. "That will be our second location, and then we’re looking at others.”

Winstanley did not disclose any other potential sites to the ABJ.

There's no word in the Biz Journal piece about whether the New Braunfels outpost of the business will employ its own version of the roadside sign, whose comedic messages have garnered a cult following on social media.

The sign's fame has led to a growing retail business that includes mugs, cups, candles, calendars and other merch — each typically featuring a different daily message from the sign — available in countless shops, including San Antonio’s Feliz Modern at Pearl.

In addition to the restaurant unit expansion, the company is also set to expand its retail offerings by launching packaged food products later this year.

"It’s starting with salsa, and then it will likely be margarita mix behind that," Winstanley told the Austin Business Journal.

The Biz Journal did not say when the New Braunfels location would open, but Rockin' R is already offering event planning and catering from El Arroyo on its website.

The flagship restaurant, founded in 1975 as a counter service taco stand, is located at 1624 W. Fifth St. in Austin.