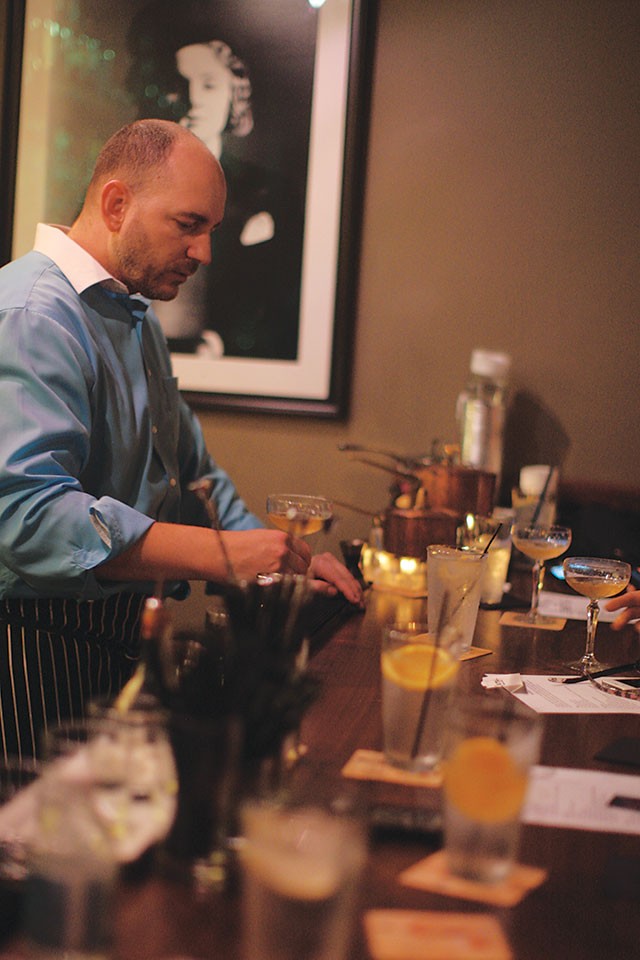 Justin Parr
Harmel in class expounding on his creation, The Hugo

When I bring up Olaf Harmel’s name among local cocktail cognoscenti, the responses land in one of two camps: he’s a Leonardo da Vinci of drinks or he’s kind of a dick. Upon further pressing, those in the latter camp are generally referring to experiences from back in Harmel’s days putting Bar du Mon Ami on the map. From more recent reviews and interactions, I think Harmel’s just a happier guy at his post-2011 perch as the head mixer at Blue Box’s upstairs bar.

Good luck finding a hater among the crowd at Harmel’s increasingly popular Wednesday Night Cocktail Seminar. Holding court at his loft spot at Blue Box, Harmel instructs a loyal group on the drink theme of the week, delving into history, folklore, and tricks of the trade while offering up custom recipes for students to sip on in class and recreate later.

The cozy gathering has space for 14-16 participants, and there’s about six who refer to themselves as “the core.” Led by Cynthia Ellison, who rocks a Jennifer Coolidge resemblance (Best in Show, Legally Blonde), the core started attending the seminar eight weeks ago. Friends Liz Fritz and Edward Marlowe, core members, actually try their hand at Harmel’s cocktails at home. “It costs a fortune to buy all these ingredients, but we do it,” said Marlowe. Others, like Ellison, don’t pretend to have done their homework. “I’ve never made one of the drinks,” she admitted, “but I like the history.”

Introducing the week’s focus, Harmel gives an overview of the libation at hand. Previous seminars included champagne cocktails, sangría (the most popular, so far), and whiskey-based drinks. At my class last week, we learned variations on The Daisy, itself a precursor to a popular 1800s style of cocktails called fixes, made with spirits, citrus, and sugar. The Daisy adds mineral water to the equation, and all of Harmel’s recipes contained soda water and/or sparkling wine to give it that effervescence.

Harmel and Adrian Sarabia (formerly of the Brooklynite and the Esquire) poured out fancy Daisy spins like the Hugo, with a pleasant, herbal aftertaste from Chartreuse, and the Imbroglio, which combines Hendrick’s gin with both dry and sweet vermouth, a touch of floral St. Germain, and a sparkling wine topper, for a Pimm’s Cup-like effect.

The favorites that evening, however, were the Navy Peach and a lemony Phiggian. The former drink relied on a fresh pitted peach half enjoying an overnight soak in Navy-strength gin, a 114-proof spirit that allegedly allowed sailors to slosh the hooch all over ammunition while drunk in the hold and still have it ignite come cannon-time. Nestled in a frosty glass, the peach is covered with a lush combination of peach liqueur and Lillet Blanc and finished with mineral water.

Surprisingly, the drink that most impressed me was made with Scotch, not my favorite spirit. Relying on The Famous Grouse instead of more peaty Scotch varieties, the Phiggian bore a strong resemblance to its less refined second cousin, the vodka-based Lemon Drop. Unsurprisingly, this concoction was way more complicated than that flavored shot, also requiring ginger and pomegranate liqueurs as well as fresh lemon.

All those drinks, doled out in respectable portions to keep students’ attention from wandering, are included in the $25 course fee. Interested tipplers should plan to show up well in advance, as the class I attended was filled to capacity before its 6 p.m. start time, and Harmel offers “no assurances” regarding seating. Blue Box is considering adding a second evening if the buzz continues to grow.

Harmel has always been at the vanguard of the “star-tender” craze in South Texas, and maybe that’s where his prickly reputation comes from — he was treating cocktails as an art back when most thought bartenders were little more than glorified alcohol waiters. This seminar helps dispel that notion, not only serving up some tasty drinks, but also demonstrating that there’s plenty worth knowing behind all that booze.