Brooklynite Owner's Latest Concepts Goes Back to Where it All Started 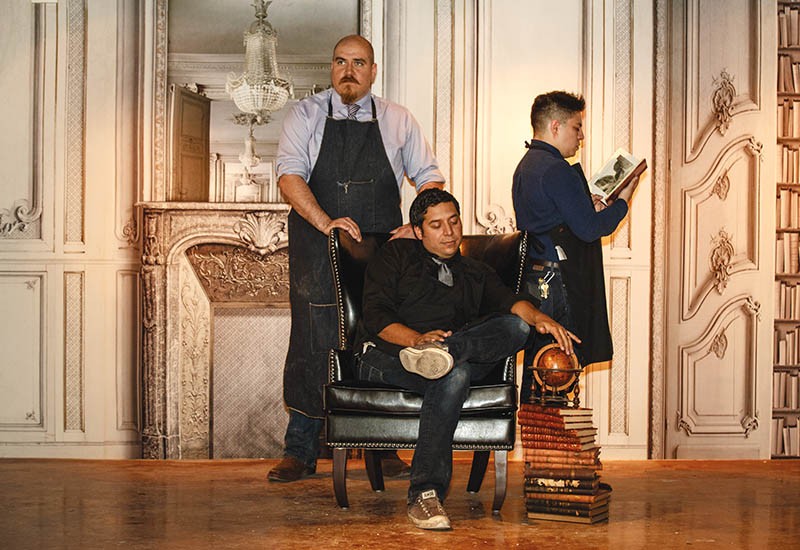 We could wax poetic about the Decade of Downtown or how SA is a City on the Rise, but why not just see proof for yourself. By the time you read this, San Antonians and tourists alike will already have been enjoying 'tails at Downtown's newest bar concept by Jeret Peña, The Last Word (229 E Houston, #10, (210) 557-7901).

At this point, most cocktail aficionados are familiar with Peña, who cut his teeth in the service industry inside the now hotel Mokara, then carved a tiny corner at the bygone Le Midi, where he started teaching San Antonians about classic cocktails, and later helped Chris Hill reopen The Esquire Tavern. There he earned a semi-finalist nod from the James Beard Awards for Outstanding Bar Program in 2012.

Since leaving Esquire, Peña formed the Boulevardier Group, made up of himself and his brother Jorel, along with partners Javi Gutierrez and Rob Gourlay, who, along with others, helped flesh out and man the concept for The Brooklynite, Stay Golden Social House (or the bar formerly and sometimes still known as Golden Gloves) and now The Last Word, which returns Peña and co. to the heart of Downtown, about half a block from Le Midi.

"Technically, I've been Downtown since I was 19 at Polo's at the Fairmount Hotel. I love Downtown and wanted to come back Downtown right next to Le Midi, really where it all started for me," Jeret said during an interview two weeks prior to Last Word's opening. "Everything aligned, it all worked out, it just took a year and a half to nail everything down."

The bar (which formerly housed Club Metro) will feature 15 cocktails on tap, along with seven house cocktails, but the vibe will be decidedly different. Designers Leland Stone and Ron Bechtol (ye of On the Rocks fame), have reimagined the space to mimic an English library of yesteryear with touches of modern Baroque. Think old-school gentlemen's club sans the hookers or cocaine.

To that extent, Last Word features a back wall's worth of booze, oddities found at local consignment shops and hundreds of leather-bound books, which Peña and Stone purchased through several shops, including Cheever Books. You can leave the smoking jacket at home, but don't expect to roll in with your pants around your ass either.

"Don't make us have to make a choice on whether we ask you to leave," Jorel said.

The brothers, separated by 14 months, have been working together since the Esquire days. And while Jorel is quick to point out Jeret is the visionary behind Boulevardier, big brother Jeret points out it takes more than that to become a good leader.

"I have no problem accepting my shortcomings," Jeret said. "But I think every great leader will fill in those holes with other great people that will stabilize the business and round out the whole structure of the deal."

Such people include Joseph Hernandez, 25, who will manage the bar with Jorel and was tasked with creating the cocktail program. Hernandez, who gained bartending skills while studying in New York City, had a rough start with Jeret.

"We fired him once back at Esquire, but I always knew he was talented ... He just didn't show up. Sometimes people have to learn hard lessons. Sometimes it takes people to fall before they see where they need to go." Jeret said, while calling attention to his previous missteps. Needless to say, Hernandez learned his lesson and has since earned his keep at Brooklynite and Stay Golden, and he's got a knack for creating solid cocktails. Although the list will feature a couple of cocktails via Jeret, Gutierrez and Hillary Woodhouse, Hernandez created the bulk of the drinks.

"The cocktails he's put together are some throwbacks from older menus, they're all beautifully balanced; it's a pleasure to work with someone that's so on point," Jorel said.

Of the 15 cocktails on tap, several will be swizzles, a favorite of Jeret's because "they're fun, tell a good story and presentation is cool." Others include Ghengis the Khan, Woodhouse's take on what Mongolia would taste like, while the Attila the Hound features a New Orleans spin—both cocktails were crafted in honor of the bar's investors.

Then, because this wouldn't be a Peña bar if it weren't pushing the envelope in more ways than one, the bar will feature a classic Last Word, ditching the usual ingredients for some serious upgrades, such as boutique gin and maraschino liqueur, clarified lime juice (made using an agar gelatin that helps separate the solids from the juice leaving a clear liquid) and Chartreuse VEP, the original, very pricey formula crafted by Carthusian monks in the French Alps. The drink will clock in at around $35 a pop—prices were still being figured out at press time.

The space might not have been ready during our chat—the bar top was still coming together, the books were still packed away—but, having done this at least thrice before, Jorel was ready.

"That's what happiness is. All this. Let's open the doors."