The action would be the first use of eminent domain during development of the Alamo Visitor Center and Museum. 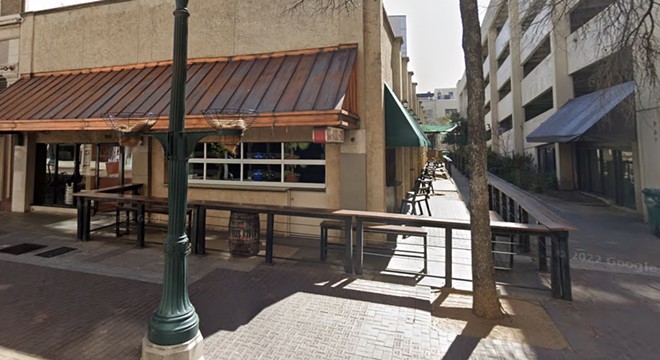 Screen Capture / Google Maps
Moses Rose’s is the last critical hurdle to clear for work to start on the proposed Alamo Visitor Center and Museum.
The latest development in the standoff between a downtown San Antonio bar owner and city officials may give a whole new meaning to the Texas historical quote “Come and take it.”

Moses Rose's Hideout may become city property through eminent domain, since its owner's refusal to sell has stymied progress on the planned $150 million Alamo Visitor Center and Museum, the Express-News reports.

Bar owner Vince Cantu has been in talks with the city for years on a potential sale of his property but has turned down multiple offers, the latest of which hit a hefty $3.5 million, the daily reports. Cantu has said he wants to make his business, located at 516 E. Houston St., part of the fabric surrounding the new museum.

“If they need my property for the museum, I’ve told them that I’m willing to sell to them only,” Cantu said last summer. “Otherwise, I’d like to be part of the new Alamo economy that’s going to be incredible after they open up the museum.”

That may not happen if San Antonio carries through with its threat to invoke eminent domain on Jan. 26, according to the Express-News.

Under that action, city council would approve use of a process that would allow the city to legally seize Cantu's bar without his consent. He would receive compensation for the appraised value of the property — likely far lower than the $17 million he’s so far requested as a sale price, the daily reports.

Located next to the 1921 Woolworth Building, the footprint of Moses Rose’s — named for Louis "Moses" Rose, the only occupant of the Alamo who left rather than die there — would provide space for the museum’s loading dock and electrical vault, the Express-News reports.

Representatives of the nonprofit Alamo Trust told the daily that the acquisition of Moses Rose’s is the last critical hurdle before it can start work on the museum. The trust is partnering with the city and Texas' General Land Office on the makeover of the historic site.

If council votes to invoke eminent domain, it would be the first time the action has been taken on the Alamo project, the Express-News reports.

Editor’s Note: this post has been updated to reflect that the latest offer to purchase Moses Rose’s Hideout was $3.5 million, not $2.5 million as previously reported.