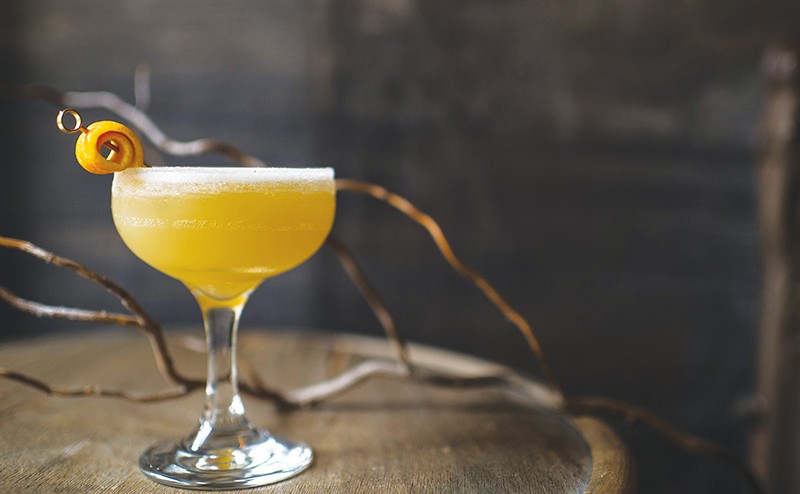 This month we continue our focus on classic cocktail revival. Shifting away from the bitters that were important to the mixtures of the Manhattan and the Pisco Sour, we turn our sights on the sour craze of the early 20th century with the Sidecar.

In my many years as a bartender, I never encountered a drink with a following as dedicated or passionate as that of the Sidecar. No matter how many years I had been behind a bar crafting cocktails or how many Sidecars I had made, the person ordering was always vehement that I prepare the drink in front of them so that they could be sure I knew what I was doing. It is for this reason that, even after all these years bartending, this is the drink that defines what a craft cocktail is.

Many people want to take credit for this month's namesake though most agree that the Sidecar came about some time during World War I, most likely toward the end. The place of origin, however, is something of a debate. Fueled by centuries-old rivalries, the two main places of origin remain France and England.

Those who remain loyal to France maintain that the drink was created in a Paris bistro named Harry's New York Bar. The story goes that the drink was named for a U.S. Army captain who would come into the bar, delivered by sidecar. Those who find their loyalties leaning toward the British favor the only slightly less popular story that a famous bartender by the name of Pat MacGarry fashioned the cocktail. The inspiration for his creation somewhat mimics that of the Paris version—that it was inspired by a gentleman who would arrive via the same transport.

Far be it for me to ruin a good story, but, more than likely, the origins of the drink can actually be traced back to New Orleans in the 19th century, where bartenders would take leftover alcohol and throw it into a shot glass, calling it a "Sidecar." Whichever story you choose to tell your patrons, just make sure you get the mixture right. The only problem here is that each tale also has its own adaptation of the recipe. So, for the sake of history, and my devotion to this much-loved cocktail, I have decided to include both.

2 parts brandy to one part Cointreau and one part fresh lemon juice.

Add all ingredients to a shaker. Add a few cubes of ice—not too many as to not throw off the mixture. Shake the ingredients briefly and strain into a sugar-rimmed, vintage coupe. If you choose to garnish, do so with a twist of orange. You are sipping one of the finest creations ever made. Grab your monocle and act like the damn fine gentleman (or lady) you are.