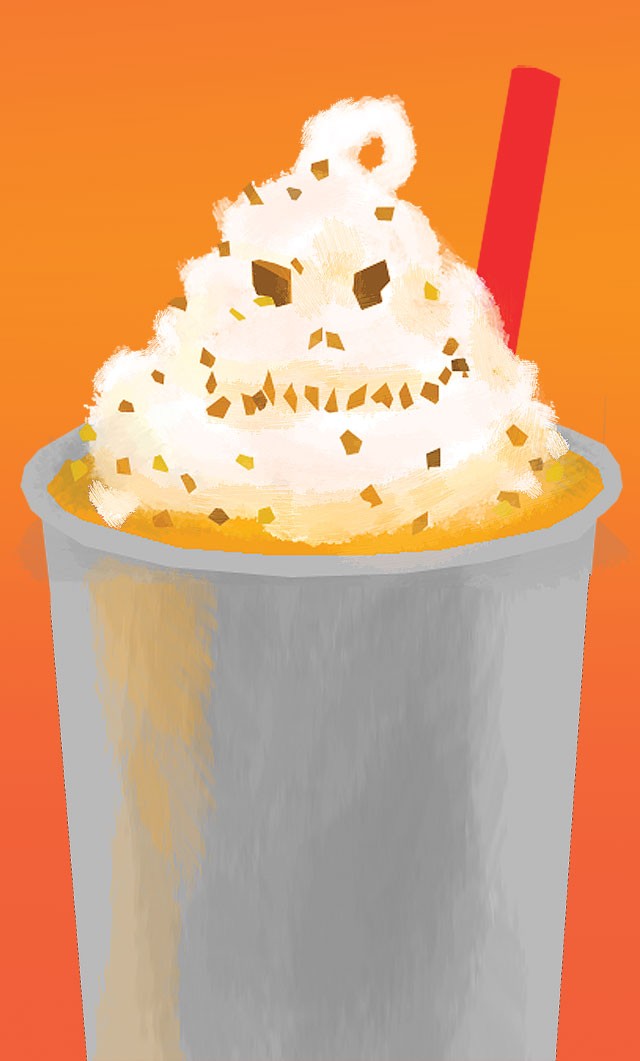 As the season turns, so have fast-food menus. Food conglomerates are rushing out their uniquely seasonal offerings to cater to our desire for the tastes of fall: pumpkin, cinnamon, spice, peppermint, cream, salted caramel, and apple; drinks, shakes, coffee beverages, parfaits, cookies, cakes, and pies. Yes, the seasons have been co-opted and customers are loving every bite.

Sonic’s Pumpkin Pie Shake is “an indulgent hand-mixed shake made with real ice cream, real pumpkin, nutmeg, and cinnamon blended with pie crust pieces, finished with whipped topping and more pie crust pieces.” Even if it’s not homemade by mom or grandma, people are still eager to get their hands on the nostalgic flavors of this pie-in-a-cup. But those nostalgic flavors also come with huge nutritional drawbacks: namely, lots of added sugars and conventional dairy. Starbucks’ Pumpkin Spice Latte has acquired a cult following since it became available eight years ago, and devotees anxiously wait for the drink to be re-featured, even posting love notes and messages on the company’s Facebook page (“heaven in one cup,” “my crack,” “old friend,” and “soooooooo goooooooooood”). Again, many of these “seasonally inspired” flavored drinks have drawbacks including price (imagine how many dollars three Venti frappuccinos per week would run you for an entire year), calories and carbohydrates, and any potential ailments brought on by artificial colors, flavors, dairy hormones, or pesticides. A large Sonic Chocolate Creme Pie Shake, for example, weighs in at 1,150 calories and a whopping 137 grams of sugar — more than six times the daily 20 grams recommended for adult women by the American Heart Association.

Although eating seasonally has seen a recent resurgence among trendy health foodies and whole-food advocates, we sometimes forget the practice actually shaped humanity; long before Starbucks imagined an autumn-inspired Salted Caramel Mocha Frappuccino, people were forced to eat what was in season in order to survive. “The reason organic food producers industrialized was so they could meet the expectations of the supermarket shopper or, as I prefer to think of it, the industrial eater, which is to say most of us,” writes real food activist and author Michael Pollan. “The industrial eater has come to expect strawberries 12 months of the year.”

While the “seasonal flavors” of fast-food boxes are often chemically concocted extracts and additives meant to entice our senses while overloading our bodies, fortunately eating real, whole, seasonal foods can be just as affordable — not to mention, considerably more healthful and delicious. Pork in fall, for example, has its own flavor. “Because our hogs are pastured and encouraged to forage for plants, different seasons produce different flavors,” write Kelley and Mark Escobedo of South Texas Heritage Pork (located near Floresville). “Over the long hot summer the mesquite tree produces lots of beans, which the hogs love to eat. The beans are sweet, which enhances the flavor of the pork.”

If pastured, antibiotic- and hormones-free meat seems too costly up front, you can buy pork bones from the Escobedos for just a few dollars and make several quarts of homemade stock. Use it in fall soups, stews, and as a liquid in bean and grain preparation or braising vegetables. Find South Texas Heritage Pork at the Pearl and Quarry farmer’s markets on weekends.

My Father’s Farm, a chemical-free farm, has been faithfully bringing their store of squash, gourds, and root vegetables for the last few months to the Pearl and Quarry farmer’s markets. Because the farm is chemical-free — yet not certified organic, a lengthy and costly process — customers can find healthy foods for less cost.

If farmer’s markets aren’t up your alley, take a second look at local grocery stores. Neighborhood grocers consistently offer a variety of seasonal produce, which usually will not be marked or labeled as in season. Sprouts (8101 Callaghan) carries an organic selection of seasonal apples and greens, including kale, collard greens, and beets (greens on top). Whole Foods Market (255 E Basse, Ste 130) is spotlighting local organic okra (a warm season crop) from regional growers like the Martinez Family Farm and Johnson’s Backyard Garden. And there’s always good old H-E-B, which, believe it or not, has its own fair share of organic seasonal eats, including radishes (technically a fall-to-spring crop), cabbage, and lettuces for affordable prices.

Sure, our tastes for seasonal fare sometimes lead to cravings for heavy and sugary convenience foods. But we don’t have to give in to a gut-busting item at a fast food chain to get our pumpkin, caramel, cinnamon, or peppermint fix. Eating real foods in season is part of being human and a way of life for our species since we came into being. Getting in touch with this food heritage simply requires a bit more thoughtfulness and resourcefulness when shopping. Shop small and local — hit up farmer’s markets, grocery stores, and local farms and purveyors. Get familiar with produce that’s in season now and choose to grow your own, purchase from those who do, or simply make it yourself. •