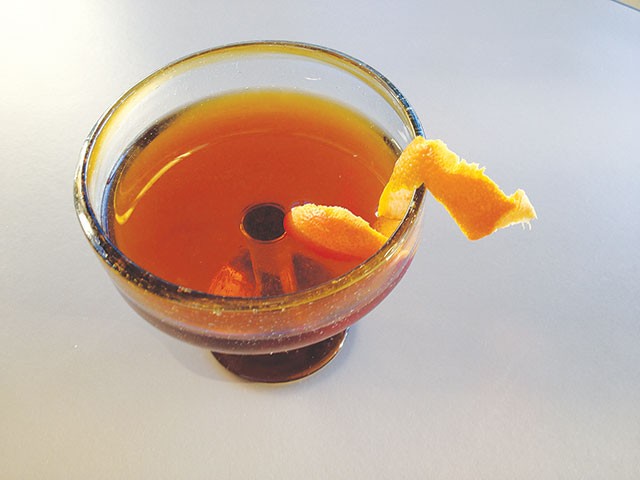 It all started with a yearning for a little Hanky Panky. Note the caps.

I could have sworn I had Fernet-Branca, that caustically bitter liqueur that bar geeks like to think tastes good as a straight shot. F-B is allegedly essential to a classic HP, invented in 1925 by Ada Coleman at the Hotel Savoy’s American Bar in London—even though only two dashes are added to the base of an ounce and a half each of gin and sweet red vermouth. (Stir with ice and strain into a chilled glass; garnish with an essential swath of orange peel.)

Some would say ‘pick another drink,’ but as the cocktail world is full of recipes calling for trace amounts of exotic bitters and other ingredients a home bartender might use once and then leave to languish behind the Tia Maria, it pays to know how to substitute. I reached for the Aperol and the Averna.

Both make a good, modified Hanky Panky—though neither has its menthol/eucalyptus intensity. But the amaro in the drink isn’t the only substitution you can make. I used Bombay Sapphire and Cinzano Rosso for the first two tests, upping the amount of Averna in the second. But then it occurred to me that, as I approached the proportions of another classic, the Negroni (it counts on equal parts gin, sweet vermouth and Campari), I might as well sub out the Cinzano for Carpano Antica; it’s richer and is my favorite vermouth in the Negroni. I liked it.

It gets to be another game deciding when a drink shades from, say, the Hanky into a Negroni—for which any of a number of amari can also be tried. And sometimes the name just has to change. Don’t have the gin required for a Negroni? Switch it for bourbon or, my favorite, rye, and you have a Boulevardier. Using Jamaican rum instead of gin yields a Kingston Negroni. What we’re getting to here is that there are whole families of drinks within which many substitutions can be made; you just need to be careful to stay within the spirit, ahem, of the thing.

To consider one such category, behold the Margarita—it belongs to a family known as sours, drinks made with booze, a tart component such as lemon or lime and a sweetening agent. Fresh out of triple sec? Try making your marg with Luxardo maraschino (start with less than you would with triple sec).

For a more floral take, consider current bar darling St.-Germaine, an elderflower liqueur. And for a spicier variant, there’s Domaine de Canton ginger. Some of these subs will work better with lemon than lime, too. And if your bottle of tequila is down to the dregs, don’t be afraid to swap it out for mezcal.

Or rum. Or go crazy and substitute Cognac … oh, wait—paired with lemon and Cointreau, that’s a Sidecar, a fact you only need know when ordering at a bar. At home, anything goes.