Red Cup Day, when the coffee giant gives out limited-edition holiday reusable cups, is one of the company's busiest days. 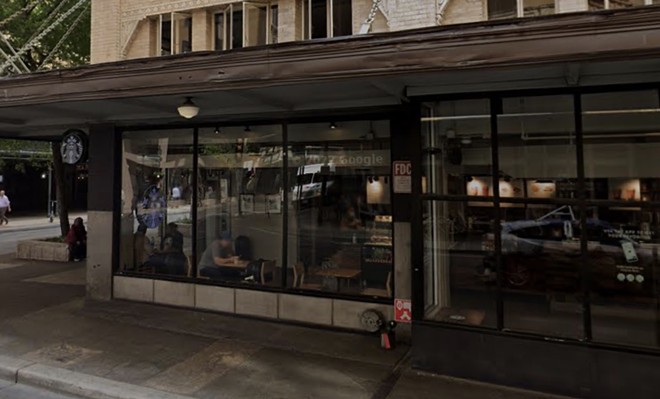 Google Maps
Workers at San Antonio’s Starbucks at the intersection of Houston and St. Mary’s streets are on strike Thursday.
More than 1,000 Starbucks employees — including the staff at one of its downtown San Antonio stores — went on strike Thursday, refusing to sling coffee on one of the company's busiest days of the year.

Members of the Starbucks Workers Union said the walkout amounts to the group's largest single-day strike. It's happening on Red Cup Day, when the chain gives out limited-edition holiday reusable cups.

The Starbucks Workers Union shared a list of striking stores on Twitter, including the downtown outlet at the intersection of Houston and St. Mary’s streets. The only other Texas stores listed in the action are in Austin and Houston.

OVER 100 STARBUCKS STORES ARE ON STRIKE TODAY. #redcuprebellion

The labor organization wants to negotiate new contracts that let employees have a voice in setting corporate policies, according to its website. These policies include rights on the job, health and safety conditions, protections from unfair firings or unfair discipline, seniority rights, leave of absence rights, benefits and wages.

The union alleges that Starbucks has fired baristas in retaliation for their organizing efforts and that it's also created roadblocks for union members who tried to meet with corporate lawyers, such as requesting last-minute scheduling changes.

The strike is expected to last until 6 p.m. Thursday evening.