The restaurant aims to blend Mexican and U.S. flavors with its scratch-made eats, and the food we sampled expertly hit that target. 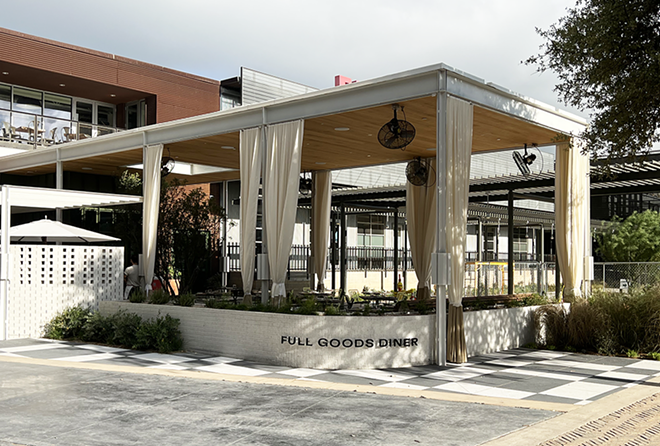 At first glance, the space was virtually unrecognizable from that of its previous tenant, Green Vegetarian Cuisine. The spot now boasts freshly painted white walls and loads of natural light, along with ash and oak accents and touches of lush greenery.

Red-and-white-striped banquette seats welcomed those visiting to sample Full Goods' breakfast and lunch fare, and the staffers served it up with gusto.

Nina Rangel
Full Goods Diner's interior is nearly unrecognizable after the former Green Vegetarian Cuisine site got a makeover.
According to previous statements from Full Goods' owners, the restaurant aims to blend Mexican and U.S. flavors with its scratch-made eats. The three menu items we sampled at the preview all expertly hit that target.

The Texas hash with roasted pork shoulder, kale and sweet potato, was largely a hit, though a tad dry. It was enlivened, however, with the addition of a poached egg and a bright and spicy pecan mole sauce.

It was 9 a.m., so we each ordered coffee — a house drip and an Americano — both of which were fresh and robust. Worthy of note: Full Goods also offers a menu of cocktails, beer and wine as well as unique non-alcoholic sippers including hibiscus agua fresca and lavender lemonade.

Nina Rangel
Full Goods Diner's classic breakfast plate (top) and Texas hash both delivered on flavor.
The new spot will open this Thursday, serving guests from 8 a.m. to 3 p.m. daily. The establishment's owner, San Antonio-native restaurateur Ryan Harms, told the Current he  welcomes a variety of diners, from those who are after nothing more than a cup coffee to those arranging a weekday working breakfast.