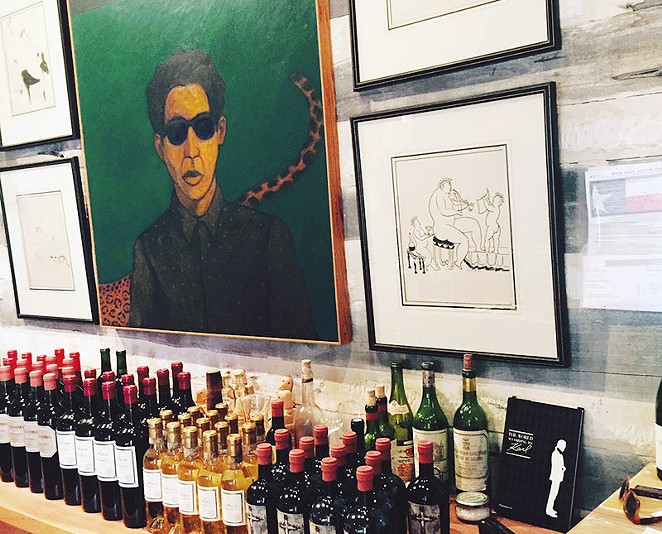 Courtesy
The wines at this boutique joint are worth the drive.

Lewis Dickson is a former Texas criminal defense attorney who has defended miscreants like former House Speaker Tom DeLay, but is now more than making up for it by turning out relentlessly natural vino from La Cruz de Comal's Wines, a 3-acre vineyard near Canyon Lake. I arrived at the winery's rustic tasting room, lined with original works by artists such as Cesar Martinez, early on a Sunday afternoon and was immediately handed a glass of Dickson's Petard Blanc.

Shakespeare immortalized the use of the word petard — as in "hoist with his own petard" (think small bomb designed to breach gates — though the term derives from French meaning "breaking wind"). Dickson is intent on giving his modern Molotov a shot at immortality as well. And, to be fair about it, there may sometimes be malodorous consequences. Bear with me while I attempt to explain.

The Petard is made from 100-percent Blanc du Bois, a new hybrid white grape that was developed for warm-climate planting and which Dickson believes is uniquely suited to the Hill Country environment. "I started out planting 10 different grapes, some of which might reasonably be expected not to work here," he says. And most didn't, leaving him with just the Blanc du Bois and Black Spanish, a grape that has been around since the Spaniards first set foot in Tejas — all this in defiance of the current thinking that hot-weather Mediterranean grapes are the wave of the Texas winemaking future.

But Dickson doesn't stop with bucking conventional viticultural wisdom — he is also steadfastly pursuing a path of non-intervention in both the vineyards and in the wine-making process. No sprays other than a compost "tea" are used in the vineyards. There's no filtering, fining or other manipulation in the winery. No Mega Purple (colorant) or sulfites are added (though naturally occurring sulfites are both inevitable and desirable). "[Added] Sulfites are annihilators," says Dickson, and one of the things he's intent on not killing is the indigenous natural yeast. Commercial yeasts mow down all resistance (in this case sugar) in their path, whereas "natural yeasts are like cats — a little bite here, a little bite there ..." Like cats, of course, natural yeasts also tend to misbehave.

But with time comes experience. "I just got the hang of the Black Spanish in 2011," he says, this after nine years of planting, pruning, harvesting and winemaking essentially by himself, though with some friendly consulting help. (It bears mentioning at this point that farmer Dickson was once dedicated to the high life in Houston — one who could also afford to take two years off to live in France in the late '90s, soaking up culture and, of course, wine.) One component of getting Black Spanish right has been the decision to stop fermentation early in order to retain acid, a quality Dickson considers paramount in his wines. "No acid, no food-pairing," he says. Put all the parts together and out comes this statement: "I want my wines to be fully and honestly expressive [of place], even if that expression, like free speech, offends some." Which brings us back to the wines.

My first experience of Dickson's wines was singular; some of them were initially almost stinky (though not exactly farty), and there were intimations of pickle barrel. The dregs of one bottle I took home, the 2013 Black Spanish-based Troubadour, still came brawling out of the bottle after two weeks on the kitchen counter. But last week, with its more extensive tasting, grudging respect turned to admiration. Yes, there were still some hints of dill, and acidity reigned — even in bottles such as the beguiling Falstaff's Sack, aged in his "sherry shack," a cave cut into the hill overlooking the vineyard. There was the Tres Cosechas built on three vintages, another nose-thumbing gesture. And that tough Troubadour, now in its 2014 expression as Cuvée Sil (named for a friend who helped harvest grapes that survived a freeze that year), was positively polished.

As the wines have limited retail availability (there are a few on lists such as the Liberty Bar's and Bob's Steak and Chop House), I suggest a drive out to the spread. A tasting of six wines will set you back $15 — well worth it as the bottle prices are in line with the amount of work required to turn them out. (Note that some work is also required of the consumer to store these wines properly, as so-called "natural" wines tend to be unpredictable.) Doing so will also help Dickson achieve his ultimate goal of "just sitting here listening to my songs (he's written some published R&B), eating my goat cheese (the goats are yet to come — but they will) and drinking my wine." As a jury of one.