GOOOOOOOOOAL: Where to watch the World Cup in SA

Send a News Tip
The 2014 FIFA World Cup begins this Thursday. For those who want to watch the game with a refreshing drink in hand (and didn't find a way to Brazil to catch the live action), here's a list of places to accommodate all your sporting needs.

Have drinks, will play. (via)

The Fox & Hound will be offering all-day Happy Hour specials during game days.

Can't beat Happy Hour at The Flying Saucer. (via)

The Flying Saucer will have its regular drink specials available including Happy Hour specials on Friday from 4 to 7 p.m.

Support your favorite team at Espana. (via)

Based on the team playing that day, España will provide beer specials on brews from the country of origin. For the thirsty set, 100-ounce beer wowers will also be on special for $22 (Miller Lite) to $27 (Imports). Domestics will be $2, wells for $2.50 and $3 for imports. Games will be shown on their high-def screen, starting at 11 a.m.

Beer with a side of wings. (via)

Celebrate the World Cup games at The Hangar with $.50 wings, $12 domestic buckets and $12 import buckets.
The Hangar Tavern (14532 Brook Hollow)
click to enlarge

Wings with ranch — a classic. (via)

The Hangar Tavern will also have $.50 wings and $14 domestic buckets.

The World Cup deserves a World Class beer. (via)

Freetail Brewing Co. will be releasing its collaboration beer with the Free Beer Movement, "We Are Going To Braz-Ale,"  just in time for the opening games on Thursday, June 12. Bottles can be purchased for $8. Lunch specials include the Team Special, the lunch-sized 1-topping pizza with a pint for $10, and the Special Squad, a medium 1-topping pizza and pitcher for $18 (charges apply for extra toppings/premium beer for both options). On Sunday, June 15, growler fills will be $2 off all day, Mondays and Wednesdays through Friday Happy Hour specials are $1 off all alcoholic beverages and $5 appetizers from 3 p.m. to 7 p.m. along with $10 pitchers on Mondays, $2.50 pints on Tuesdays and $2 off the Special Squad lunch option on Wednesday.

Watch the game with a refreshing margarita. (via)

Regular Happy Hour specials until 10 p.m. with $3.50 margaritas and free chips and salsa for dine-in customers. 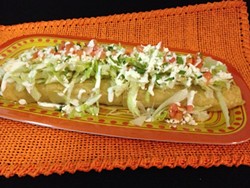 Watch the game froggy-style at Los Frogs. (via)

Draft beer is on special for $2 along with $3 margaritas. Thursday is Karaoke night while Friday and Saturday will have live music with the game showing.

A cool Corona for the game. (via)

Bottles and pints will be on sale for $3, 210 Ceviche will also feature the Caipirinha, a Brazilian cocktail. Tostadas de Ceviche 3x2 is expected to be on the menu as well.

The World Cup has gone to the dogs. (via)

Cocktails and more at Blue Box. (via)

Blue Box will be showing the games on its 8ft High-def projection screen while serving their signature cocktails.

A special tapping of Founders Devil Dancer will kick off the games on Thursday, 7 p.m. with Founders Imperial Stout, Founders Centennial IPA and Founders Dirty Bastard on tap as well. Beer specials during USA games will follow throughout the weekend.

GS 1221 will be opening shop early at 11 a.m. to satisfy SA's beer needs during game days. Beer specials fluctuate each day with various food trucks at night and a World Cup Draft Party for customers. Each game day patrons have the opportunity to select four teams with different prizes handed out at the end of the game. 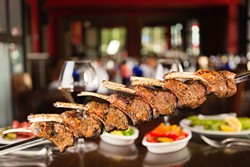 Eat meat the Brazilian way. (via)

A 20 percent discount will be applied to all take-out orders starting June 12 to 13. Texas de Brazil offers all meats, sides and salads by the pound. The special includes Brazilian favorites Picanha, Brazilian Sausage and Filet Mignon Wrapped in Bacon.

Grand Agave Night Club will be serving complimentary tacos along with specials on Micheladas, $2 for domestics and $3 for imports.