Can You Guess What Halloween Candy is Most Popular in Texas? 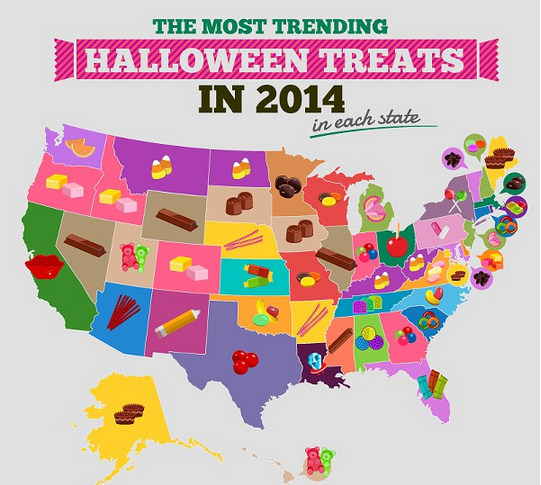 SumoCoupon
Wondering what the majority of your neighbors will be handing out to trick-or-treaters tomorrow night? Don’t worry—no matter where you live, most of your neighbors won’t be giving out razor blade apples or marijuana edibles or anything sinister like that (not according to Google, at least).

By checking out what holiday goodies have been trending on Google, SumoCoupon has compiled a list of the most popular Halloween treats in each state.

Some states are keeping it old school and gross this year, like Rhode Island where Charms are the most popular candy, and New Hampshire where they still have love for those unpleasantly chalky Bottle Caps. Candy corn, the treat that is as classic and old school as it gets when it comes to Halloween fare, still reigns supreme in four states: Montana, North Dakota, Kentucky, and West Virginia. (Sidebar: Do the three flavors of candy corn actually taste different? As a kid, I was convinced they did and would only eat the yellow part. Now I’m not so sure.)

Mambas were found to be surprisingly popular in Idaho, Oregon, and Colorado. I would have thought more people preferred Starbursts over Mambas, but they are only the most popular candy in Delaware.

The worst of the worst on the list (even worse than all the Good & Plenty in Pennsylvania) are the dreaded non-candies. These are the nasty, horrible things that are immediately weeded out and thrown away once trick-or-treaters return home and dump their hauls out onto the floor. Vermonters and Marylanders will be serving up a ton of non-candy, non-chocolate raisins to disappointed kids tomorrow night, while Ohioans will be handing out apples (not even candy apples, you guys). My suggestion to anyone living in these states is to travel to Louisiana or Kansas where people will be throwing delicious Ring Pops and Jolly Ranchers at you from every doorstep in every neighborhood.

At least raisins and apples are foods, though. You can’t eat pencils, New Mexico. You’re doing this Halloween thing all wrong.

In Texas, we are not giving away shitty school supplies or health foods. We’re passing out a ton of Atomic Fireballs and, out of all the states, we’re passing out the most of them. This is probably because in Texas we are all spicy, hot-tempered spitfires. Or it could be because we like to live dangerously. I have never actually eaten a Fireball myself, because I was always told you could choke on them and die, but in Texas, where rattlesnakes, chainsaw-wielding murderers, and Ebola patients abound, most people are willing to take that risk for some sugary goodness.

Take a look at the entire map and legend on the next page.