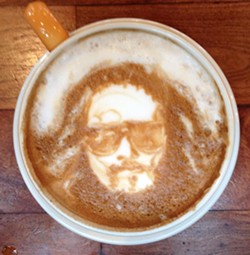 The Dude There's an overwhelming sense of guilt that comes from drinking a latte's perfect foam tulip. I struggle with this at Local and Il Sogno, often, so I was intrigued by Halcyon Southtown's Facebook posts which featured itty bitty portraits on their lattes. I had to investigate. I met with one of the resident java artists, John Lauber, Halcyon's barista manager, who also teaches art classes at Michael's. "I started doing it last doing it last year when someone asked for a Jesus in their latte for Easter," Lauber, 29, said.
click to enlarge 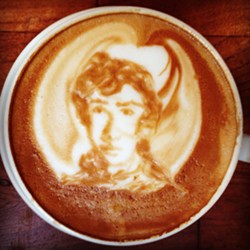 Benedict Cumberbatch Since then the requests have been pouring in. Several Sherlock fans have come forward asking Lauber to recreate the foxy Benedict Cumberbatch. The last pair of fans waited two hours for the portrait (the espresso machine was down). Other requests include Samuel L. Jackson, The Dude, The Crow, Captain Jack Sparrow. Dr. Who fans? Lauber's also created a latte portrait of Matt Smith.

To start, Lauber focuses on the pour. However which way the foam is added could mean the difference between a small or slightly larger "canvas." He uses a plastic toothpick and a half shot of espresso to add contrast to the white backdrop. Lauber works in short, quick strokes in order to make sure the latte is still fairly hot for drinking. Because practice makes perfect, Lauber usually sketches out subjects on paper to familiarize himself with the process. "It's a learning process, so many things are moving and it's not an infinite medium. You have to be OK with making mistakes...you can't go back. Once it's done, it's over with," Lauber said. Check out Lauber at work: