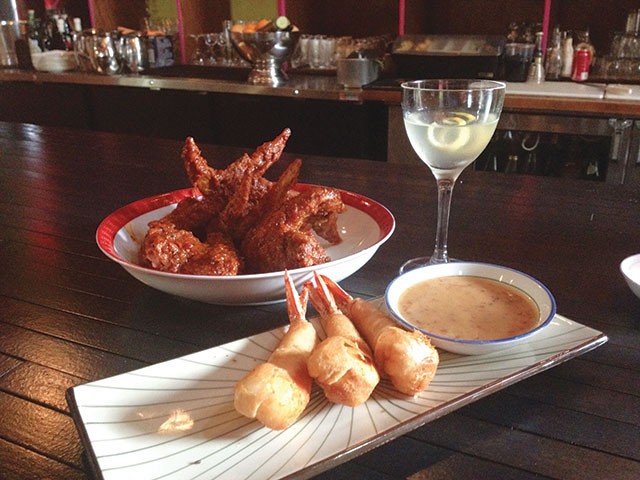 Jessica Elizarraras
Bring on the napkins—these wings can get messy

It’s not often we head back to a restaurant a month after its food review, but Umai Mi’s “super delicious and really ridiculous” happy hour drew me in with its bold claim. Spoiler alert–they’re not bluffing.

Badass Curries, and Then Some, at Jason Dady's Umai Mi

Here’s a crash course for those unfamiliar with the concept: Umai Mi replaced BIN 555, Jason Dady’s wine bar/miscellaneous eatery in January. If BIN was the safe guy you take home to meet mom, Umai Mi is definitely the bad boy that loves blasting Yeezy’s latest jams. The eatery hearkens back to bits of San Francisco’s Mission Chinese with its paper lanterns and crimson lightning, while setting itself apart with colorful waving felines strung up from the ceiling in gold cages. Robert Tatum and wife Carol Martelle Tatum spruced up the joint with bright pink, orange and green hues and an excellent use of lantern clusters.

I stopped by on a Tuesday afternoon after battling traffic on 281 (the only downside to the happy hour is that it’s also during rush hour). Available 4-6 p.m. Monday through Friday and 11 a.m.-2 p.m. Sundays, the SD&RRHH features six “bites” for $5 each. I ordered the shrimp rolls and the spicy Thai curry wings to start. The rest of the menu includes the papaya salad, edamame, pickles and robata grill selections (the kitchen was whipping up mushrooms that evening). Don’t expect to find traditional rolls; these extra large shrimp come four to an order and are encased with light and crispy wonton wrappers. Dip them in the nobu sauce of spicy mustard and white miso for a sweet-hot kick.

It’s a good thing I ventured on this excursion solo, because I hate sharing and the wings were all mine. Fried up and then coated in a thick curry paste, the order of five wings was dished up nice and hot … almost too hot to immediately get my hands on. Even then, I had to contend with eating a whole wing. I’m a bit of a wing connoisseur, but I definitely needed more than a fair share of napkins to get through this order.

To quench my thirst I ordered one of the $7 signature cocktails usually priced anywhere from $10 to $12. My Lady Bird began with fresh muddled Thai Bird chili and ginger over agave and ended with Corzo silver tequila. This Thai-inspired marg had a serious kick. Beer drinkers can also cool off at Umai Mi, which features eight craft brews on tap including two Branchline selections and a Ranger Creek ale. I also tried a rather light Tripel Karmeliet Belgium via Brouwerij Bosteels that carried a sneaky 8.4 percent alcohol by volume.

My lack of happy hour buddies kept me from taking advantage of the half-price wine bottles; learn from my mistake and make sure to take a few amigos to help you knock back a bottle of two. Original prices range from a special occasion $120 Gosset Grand Brut Rose to the wallet-friendly $16 Becker Vineyards Chardonnay. Either would pair just fine with an order or two of the wings.