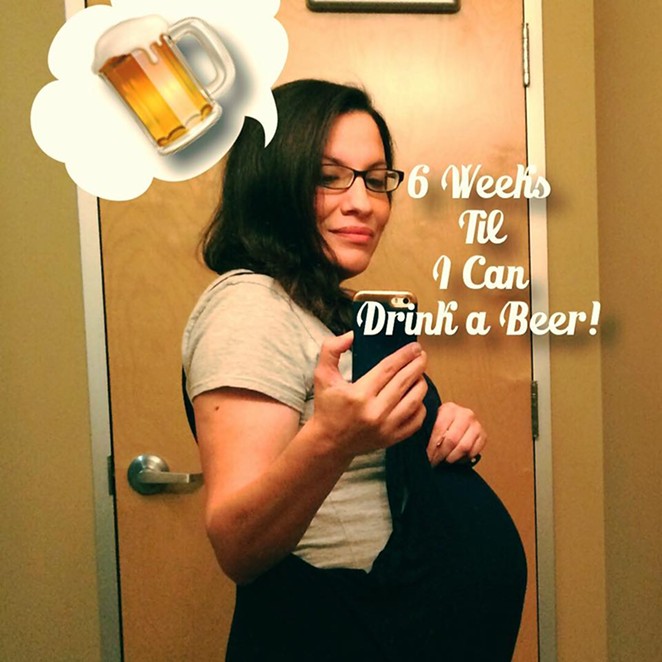 Instagram/Shescraftypod
This post was first shared on She's Crafty Podcast.

When I was pregnant, everyone was asking how soon I was going to start drinking again. What would my first beer be? Who would I drink it with? Where would I drink it? I mean, I'm She's Crafty. I host a show about beer. Wasn't I just chomping at the bit for Shotgun Friday?

I mean...kind of? Of course, I missed the taste of beer and for every new beer release, I secretly threw a toddler-sized tantrum inside my head. "It's not fair! By the time I'm ready to drink again, this beer will be no good! Wah!!!!"

But, then, a magical little alien came into the world. That little face, so sweet and perfect...and I stopped thinking about everything I was missing out on and started focusing on the tiny life I was gifted. Eventually, I did drink a beer and get back into the hoppy swing of things, but I learned some things about having a newborn and working in beer along the way...

I ALWAYS HAVE A REASON TO DRINK.
I actually have a really good baby, but that doesn't stop me from obsessing about the frequency of her bowel movements or charting her on the growth chart. A cold beer after a set of fresh vaccinations can go a long way.

I'M JASMINE, AND THIS SHIT IS A WHOLE NEW WORLD.
Everything has changed since I had the baby. Nothing tastes like it did before. Beers I used to love, are now difficult for me to finish. Beers I never liked before, are now my go-to fridge beers. I have no idea what's happening. I never know where this magic beer-carpet will take me.

IF "LIGHTWEIGHT" WERE A CITY, I'D BE THE MAYOR.
It's a one beer to one glass of water life for me, now. Otherwise, I'm telling strangers my childhood stories and whizzing through every Whataburger drive-thru at the end of the night. Simply put, I just can't handle my beer like I used to.

BEERMENTIA, ALL DAY LONG.
I can't remember anything. Hand me a beer. We can talk about it for hours; but, as soon as I walk away, I'll forget the name of that beer...or that I even drank it...or that you even exist. I even forgot I was writing this blog for a few minutes...

In six months, this will probably all change. Until then, Shotgun Friday will have to be done from an Ozarka bottle and a quarter can of something I'll forget the name of.