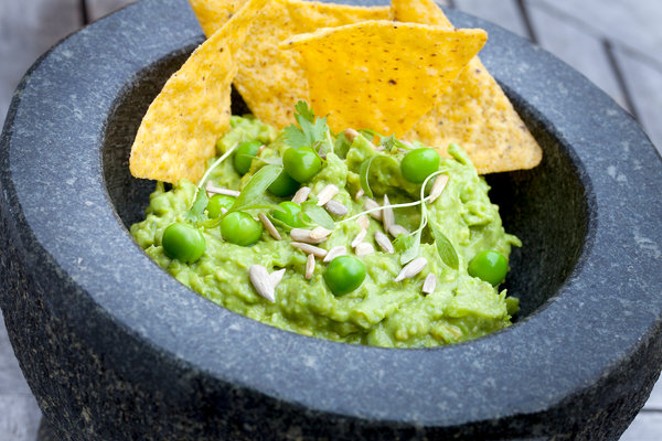 Dominic Perri for The New York Times
All we are saying is give peas a chance.
So many people are apoplectic that the New York Times published a guacamole recipe with peas in it, and not just peas — English peas, the Queen's peas. The Paper of Record (when it comes to guacamole, apparently) was ready to defend its revolutionary addition with an introduction to the recipe that basically said, "No, really, you should try it."

The peas add intense sweetness and a chunky texture to the dip, making it more substantial on the chip. They also intensify the color of the green avocado — and help the guacamole stay that way. Pea guacamole keeps its bright hue in the fridge for a few days without turning brown around the edges.


People are incensed across party lines, from the liberal women over at Jezebel — "Go Straight to Hell, New York Times" — to the Texas Republican Party, who said the Times' playing it fast and loose with a legume was tantamount to declaring war.


The @nytimes declared war on Texas when they suggested adding green peas to guacamole. http://t.co/EDTqbzzsyE pic.twitter.com/FHjTvCaNj7

Calm down, everyone, especially you, Texas GOP. It was your Gov. Greg Abbott  who demonstrated he knows nothing about Texas barbecue when he said, "the most important thing about barbecue is sauce," which, no, just no.

We know it sounds weird, but all we are saying is give peas a chance. They're pretty fantastic.

Sure peas in guacamole sounds like a sacrilegious slap in the face of the gods of Tex-Mex, but we kind of see where the Times is coming from with regard to the surprising sweetness and addition of texture.

The first thing that comes to mind is Folc's pea ricotta toast which is similar in texture and concept. Here's what our food editor Jessica Elizarrraras said about it back in October: "The combination of creamy and fresh ricotta meets just-shelled peas, a sprinkling of salt and herbs is both dainty and filling, savory and sweet."

Meanwhile, Amaya's Taco and Bakery serves a delicious pea salsa that Elizarraras said she needs more of in her life. "Made with habanero, onion, garlic, spring peas and heavy whipping cream, as inspired by chef Elizabeth Johnson, the salsa is nuanced and a delight," she wrote just this past May.

So peas in things you can dip chips into is not totally unheard of. So it's not a total gentrification on time-tested Mexican flavors.