Hopping on the Auto-banh: a Sampling of Banh Mi Sammies in Town

Jacqueline Fierro
Get out of that ham-and-cheese comfort zone! This sandwich can take the place of your regular club sandwich lunch. One of the main things to remember with Vietnamese cuisine is that sauce matters — don't forget the hoisin, Sriracha, soy and sweet chili sauce.

First stop, French Sandwiches located in the Medical Center. Honestly, we were not expecting to find bánh mì on the menu, but we did. The pork and vegetables were parallel with the Vietnamese sandwich, but crispy bread and garlic mayo gave it a French touch. Typically with bánh mì, I cover the top of the sandwich with hoisin and Sriracha, but I was pleasantly surprised with the garlic mayo. I still ordered hoisin on the side.

When we arrived at Pho Hung Cuong, everyone was eating pho because of the cooler weather. Our waiter recommended the pork bánh mì for a mere $4.60. The sandwich was stacked with fresh carrots, jalapenos, cilantro and cucumbers, which gave the sandwich a nice crunch. We paired our bánh mì with a bowl of pho. How can you resist pho when everyone around you is eating it? If we had to choose one favorite item from Pho Hung Cuong, the pho would win hands down, but the bánh mì was a good contender.

With our stomachs still ravenous, we jumped in the car and headed down I-10. We heard the chef at Whiskey Cake went around the city trying a variety of bánh mìs to come up with the perfect Whiskey Cake version of this Vietnamese classic. That's when the Thai cashew pork baguette with French bread was created. The anticipation grew as we waited and once it arrived, Jacqueline and I immediately knew this was not your typical bánh mì. Looking at the sandwich, we could tell that the vegetables had been cut the moment we ordered. The sandwich was not too spicy, not too dry, not too heavy, but not too light. The meat is thick and had a smoky barbecue touch. If you're looking for an Americanized version of bánh mì, look no further than the Shops at La Cantera. 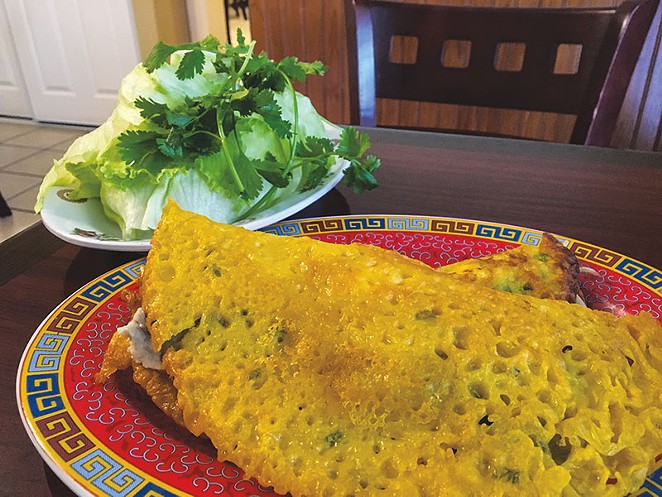 We ended our Vietnamese inspired tour at Viet Nam on Broadway. Bánh xèo, a Vietnamese savoury fried pancake, was on the menu and although were were a bit nervous because we had never eaten a fried Vietnamese pancake filled with shrimp and pork, we ordered two. The bánh xeo was served with lettuce and cilantro, and the server informed me that you were to cut the pancake, wrap it in lettuce with cilantro and top it off by dipping it into fish sauce. It truly felt as though we were in a different country. The authenticity of the dish was exciting. If you're Vietnamese cuisine fanatics like us, bánh xèo is where it's at for an extra kick of flavor.

Singhs Vietnamese Truck can be described in one word — amazing. We ordered a chicken bánh mì and the flavor from the chicken and sauce on the sandwich created such an enthralling, savory taste. The bread on this bánh mì was softer than the other sandwiches we tried on the tour and truly made a difference in the overall dish. The winner, in our book, of the bánh mì tour goes to Singhs.